The species Cydalima perspectalis (Box tree moth) is a butterfly from the Crambidae family, which is native to the region of East Asia. The diet is related to plant species of the genus Buxus, which grow in the form of bush and are often used in horticulture. The first species was recorded in Europe in 2006, followed by the spread of its area. It is assumed that it had been introduced into Europe through the transport of plant species. Larvae of this kind of butterfly feed on leaves of the genus Buxus and they can almost completely lead to defoliation of the bushes for a short period of time. As there are autochthonous species of the genus Buxus in Europe, it is clear that the butterfly represents a threat to native plant species. The analysis of data from the “Alciphron” database shows that the type of Cydalima perspectalis was first recorded in Serbia in 2014 with just a few finds. As of next year, there was an increase in the findings (even 10 times higher in 2015 than in 2014). In the following period, the number of findings were growing and falling slightly over the years. The map  below shows the UTM fields (10×10 km) in which an invasive species is recorded per year (period up to 2000, 2000-2010, 2011-2017 and 2018). In addition to harmful economic effects (destruction of plantings in parks, gardens, etc.), the most serious consequence is the destruction of native species of the genus Buxus (in the territory of Europe, these are Buxus sempervirens and B. balearica). Situation is not alarming, but it is definitely that the invasive species of Cydalima perspectalis has space for expansion and that it will most likely come in the upcoming period if appropriate control and protection measures are not taken, and this can have undoubtedly serious consequences. 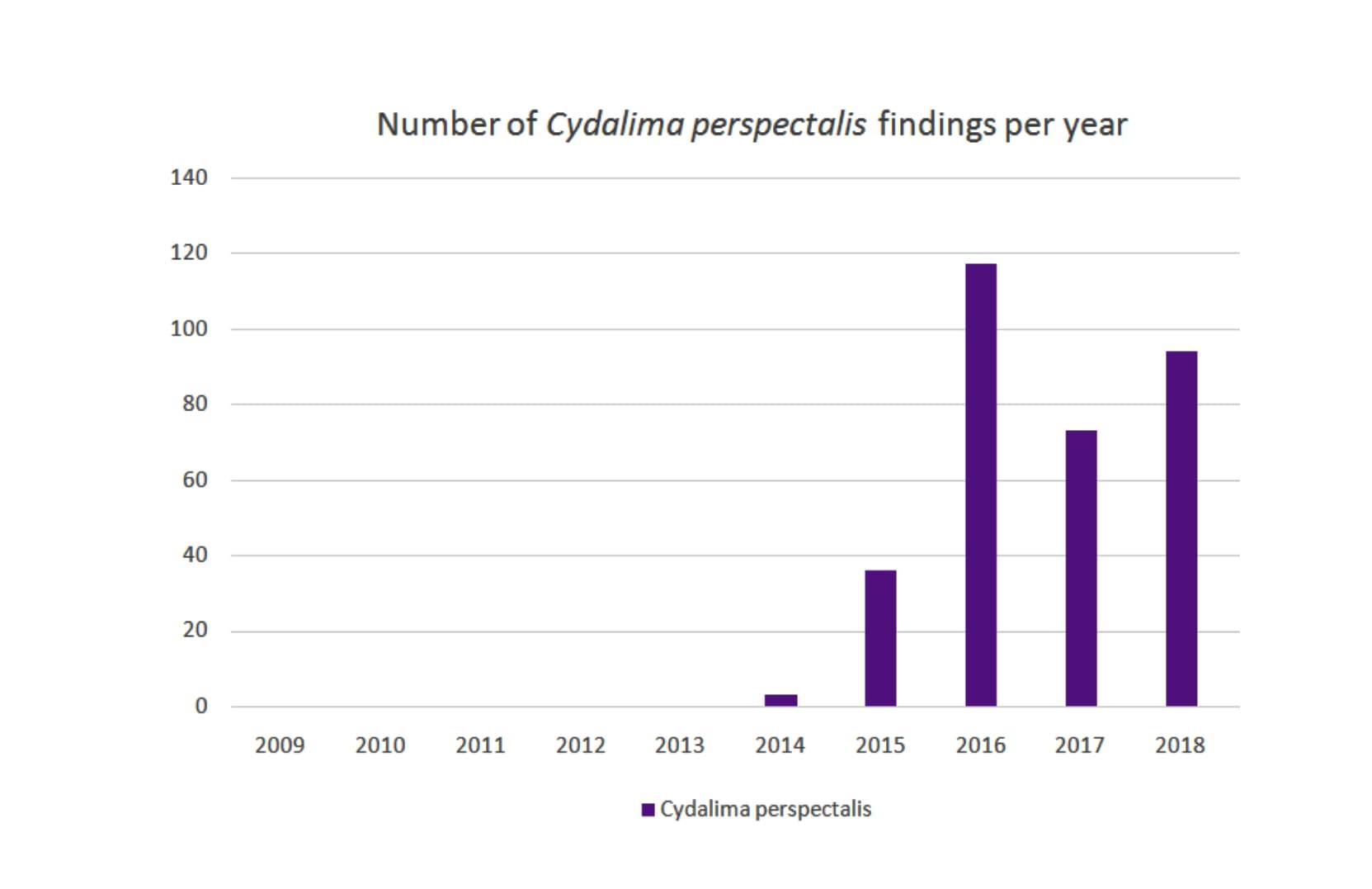 Use and interpretation: The indicator shows a change in the number of invasive species findings in the period from 2009 to 2018. The change directly points to the rate of spread of the invasive species, and indirectly to the presence of negative anthropogenic factors in the ecosystem.

Key question(s) which indicator helps to answer: When the invasive species Cydalima perspectalis appeared on the territory of the Republic of Serbia? What is the trend of species findings?

Use of indicator: The indicator clearly shows an increase/decrease of the invasive species findings, which tells us about the potential threat to other ecosystem components.

Downward trend – the reduction of invasive species findings or stagnation suggests that the species does not have a strong invasive character or has reached current maximum of expansion; that it is not a priority in developing biodiversity protection measures, and that the ecosystem is stable.

Units in which it is expressed: Number of findings per year.

Description of source data: Online database on insects in Serbia “Alciphron” (http://www.habiprot.org.rs/Alciphron/), period from 2009  to 2018, number of findings per year.

Calculation procedure: The total number is obtained by exporting a set of data from the “Alciphron” database, which gives us the number of invasive species Cydalima perspectalis findings. The base itself is the software that gives us the option of export of such data, in this case the export was made for selected years. 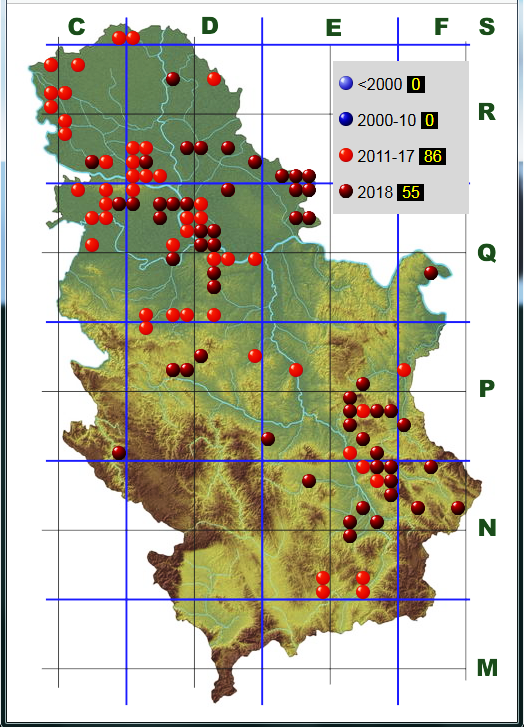