Key message: In the period from 1953-2018 the area under forest has doubled

Assessment: The indicator shows trend of changes of forested area in the territory of the Republic of Serbia. It is used by forest authorities, but also by biologists and ecologists in order to assess percentage of forested area compared to the total area of the Republic of Serbia. Changes in forest area due to forestation, renewal or deforestation, represent an indicator for sustainable forest management and to monitor the role of forest ecosystems in the global carbon cycle.

According to CORINE Land Cover for 2018, the area under forest in the Republic of Serbia (excluding the territory of the Autonomous Province of Kosovo and Metohija) was 2,380,917 ha, or 30% of the territory, while according to SPOT5 satellite images, the area was 2,654,000 ha, which is about 35% territories. In the period from 1953-2012, there was an increase in the area under forest by over a million hectares, an increase of 75% compared to 1953.

Based on SPOT5 satellite images with resolution of 10 m, epoch 2010/2011, the area under the forest was 31,956 km2, which represents about 36% of the territory of Serbia. The area of deciduous forests was 29,442 km2, the area of coniferous forests is 1,965 km2, and the area of mixed forests was 549 km2. Apart  from  loess  planes,  swamps,  rites,  salt  marshes  and  high-mountain  belts  above  the  natural  upper  forest  border,  the  territory  of  Serbia belongs to forest biomes. In fact, natural conditions in Serbia are such that primary climatic forest vegetation could cover 85% of its surface. Although  there  are  no  written  data,  it  is  assumed  that  in  the  medieval  Serbian  state,  the  forestry  was  approximate to the potential, between 75 and 80%. Because of this, Stefan Nemanja (1113 – 1199) allowed the inhabitants of Dubrovnik to cut our forests for the needs of shipbuilding without compensation. Forest cutting continued after Nemanja, due to the expansion of pasture areas and the development of mining. Forest cutting continued during the time when the forests were exploited not only for to mining, but also because of the more developed cattle breeding. Therefore, Emperor Dušan (1308-1555) by Article 23 of the Dušan Code of 1349, banned the miners of Sas from indefinitely reducing the forests and settling down on the areas that have been cleared. The ban on unlimited deforestation was later expanded to the nobility, and the inhabitants of the villages Ljubižnja and Skorobijnja in the  Prizren  region  were  forbidden  to  “poorate” the mountain  on  the  property  of  the  Prizren  monastery.  At the time of the Turkish occupation, from 1718 to 1721, only 50,000-60,000 inhabitants lived in Serbia due to population displacement. Due to depopulation, the forests conquered their old premises and covered over 80% of the territory. However, at the beginning of the 19th century, especially after the First Serbian Uprising, the population began to return. In 1820, 500,000 inhabitants lived in Serbia, and 2,492,882 in 1900, which led to massive deforestation, primarily for the expansion of agricultural land and extensive livestock breeding. For this reason, in 1885, the forests decreased to only 32%. This was not the end of the destruction of forest vegetation, after the Second World War, it covered only 21.4 % of the territory, which is the smallest forest covering surface in the history of these areas. Thanks to the measures of afforestation, melioration, care and protection of forests, as well as migration of the population from mountainous areas, in the second half of the 20th century, the area under forests was somewhat increased, so today the forests cover 30.6% of Serbia. However, Vojvodina, as a typical agrarian area, has remained permanently without forests.

The indicator monitors the forest surface, according to the classes of deciduous, conifer and mixed forests, compared to the entire surface of the Republic of Serbia.

The indicator helps to answer the question: What is the trend of changes of forested area in Serbia?

The indicator shows trend of changes of forested area in the territory of the Republic of Serbia. It is used by forest authorities but also by biologist and ecologists in order to assess percentage of forested area compared to the total area of the Republic of Serbia. Changes in forest area due to afforestation, renewal or deforestation, represent an indicator for sustainable forest management and to monitor the role of forest ecosystems in the global carbon cycle.

Data gathered based on SPOT5 10-m resolution satellite shots 2010/2011 to calculate the forested surface. Trend of changes of forested area in the territory of the Republic of Serbia according to the data of Corina Land Cover.

The indicator is traditionally described in annual state of the environment reports in Serbia, and it is determined as biodiversity indicator, according to the Rulebook on the National list of environmental protection indicators (Official Gazette of the Republic of Serbia No. 37/2011).

There is a problem related to surface that CORINE cover. The surface is more than 5 ha, which means it is not too much precious for foresters, but it provides cheap, user-friendly and comparable data.

Data are updated annually. Data provided by the Statistical Office of the Republic of Serbia are updated biannually. 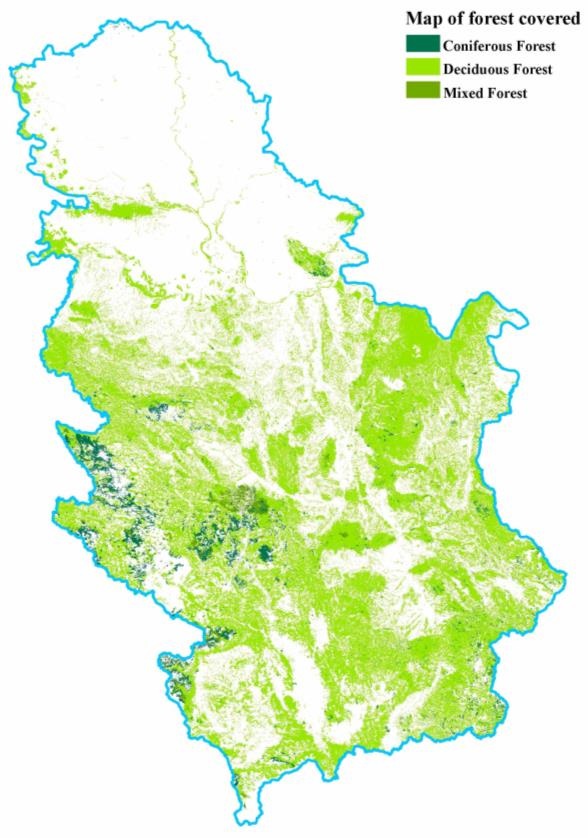