Key message: The trend of the forest bird species is stable with a slight increase and a slight decrease of population in the meadow species

Assessment: The indicator shows trend of changes in the population abundance of selected bird species from forest and meadow habitats. The change in the population of birds explains the loss, and change in the structure of their habitats, due to fragmentation and isolation, as well as other changes in the environment that directly or indirectly affect the change in population structure. In the period from 2008 to 2013, trend in population dynamics of birds registered in meadow habitats was more or less stable, what was even more evident in forest habitats.

Different patterns of the dynamics of bird populations indicate significant changes in forest and meadow ecosystems that specifically affect different species. The explanation for the increase in the number of forest habitat types is probably due to the increase in areas under forest and shrub vegetation, but may also be due to changes in the wider environment. However, in the forest habitats there is a significant, even number of species whose number is decreasing, which is probably due to the decrease in the quality of forest habitats (these are species specialized for life in old forests). Although large number of species of meadow habitats show a downward trend, there is an increased number of species with a stable population. Improving the conditions in agricultural areas, as well as reducing the intensity of agriculture due to depopulation of the villages are the likely reasons for such a trend. Among the forest species, there are more species with stable population, while the increase in populations of some species is obvious (e.g. Dryocopus martius). However, species with a markedly negative trend (e.g. Accipiter gentilis) are noticeable. Among the meadow species, the most pronounced negative trend was observed in the Perdix perdix, Oenanthe oenanthe and Streptopelia turtur. 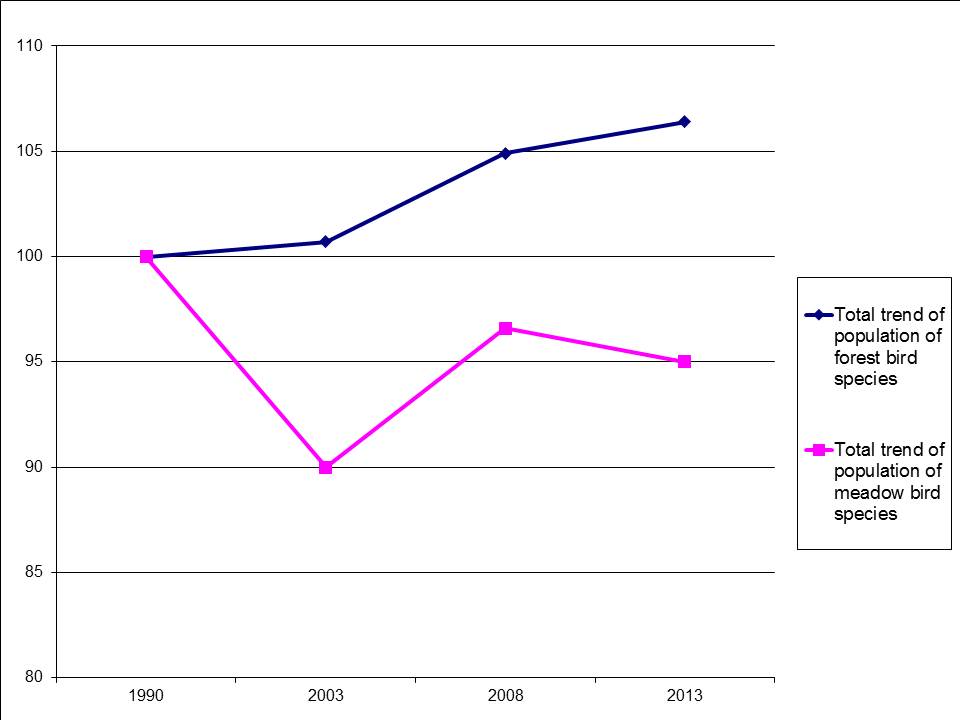 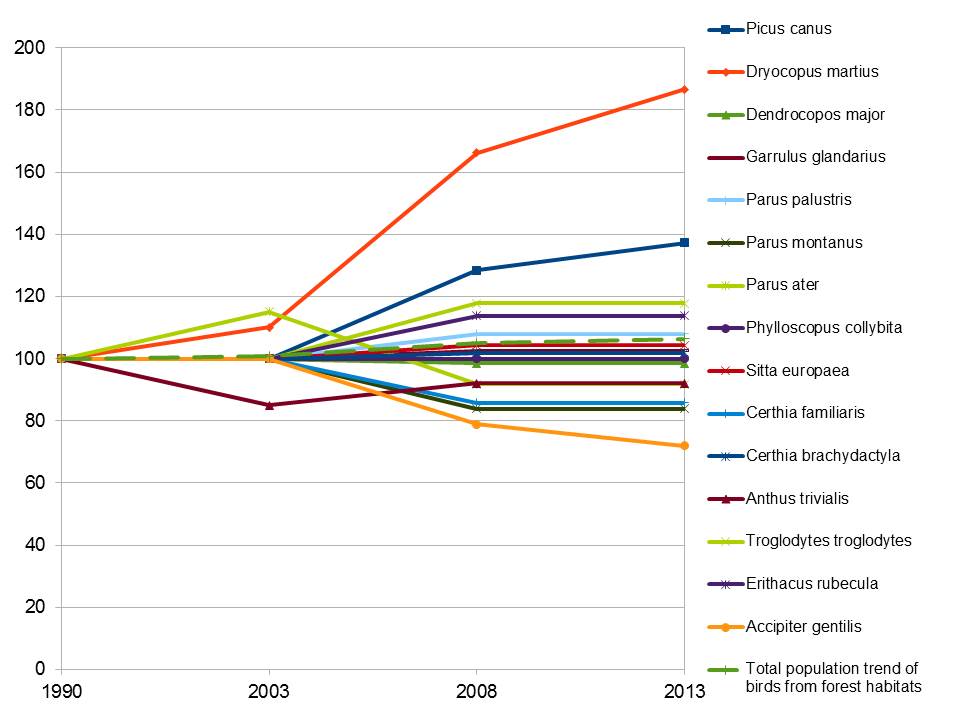 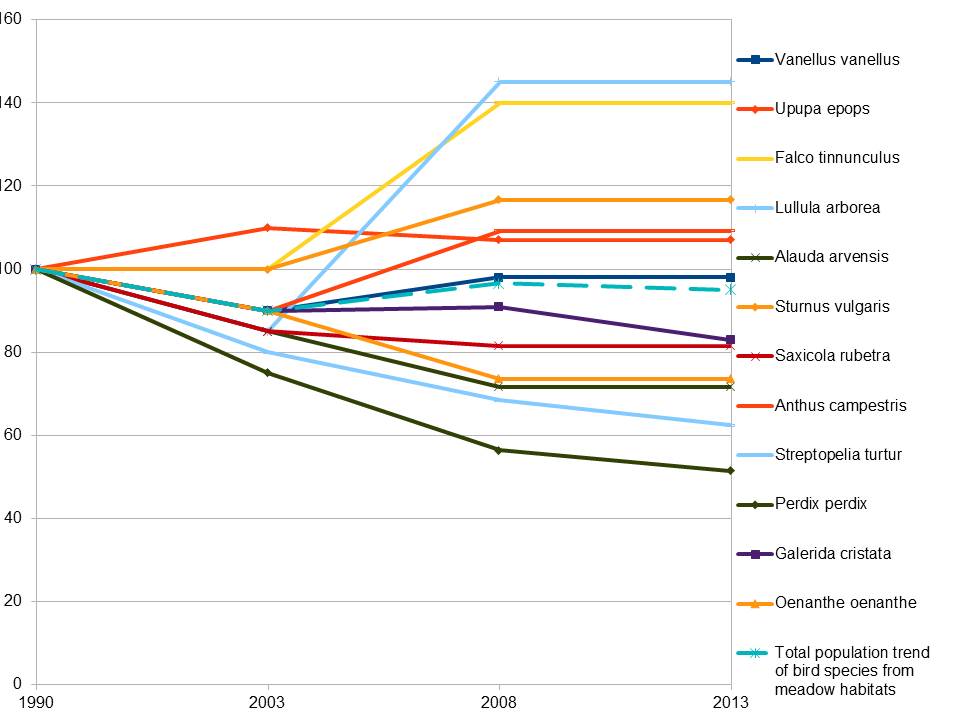 The indicator helps to answer the question: What is the trend in population growth of selected species in two habitats: forest and meadow?

Number of population of selected bird species and population growth through the time and by habitats. Changes of the most important types of habits, according to CORINE Land Cover and EUNIS.

The periodicity of data collection: Institute for Nature Conservation of Serbia, Bird Protection and Study Society of Serbia collect and analyse data. There are two periods when different changes were recorded that have been generated inside and outside population of monitored bird species. The indicator also relates to trend in changing of the most important types of habitats according to CORINE Land Cover and EUNIS, which means dynamics of changes in the area of forest, meadows, mixed and other types of habitats.

The indicator is determined annually, and it is important for monitoring population growth of selected bird species in two habitat types: meadows and forests.

The indicator is traditionally described in the annual state of the environment reports in Serbia, and it is determined as biodiversity indicator, according to the Rulebook on the National list of environmental protection indicators (Official Gazette of the Republic of Serbia No. 37/2011).

The number of individuals per unit area. Number of breeding pairs. Surface expressed in hectares (ha).

Institute for nature conservation of the Republic of Serbia

Institute for the nature conservation of the Vojvodina Provence

Trend in changes of population abundance of selected species of birds according to the expert and administrative lists and methodology of counting and assessment developed by the European Agency for Environmental Protection. Dynamic of habitat changing of habitats according to EUNIS classification and / or the CORINE Land Cover methodology. 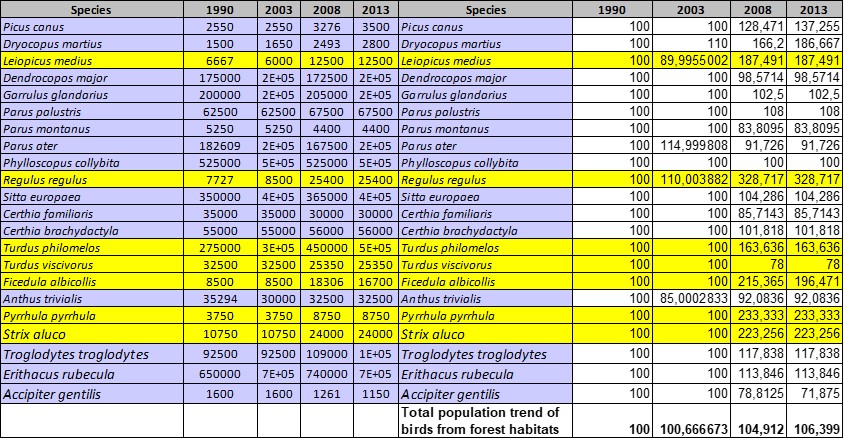 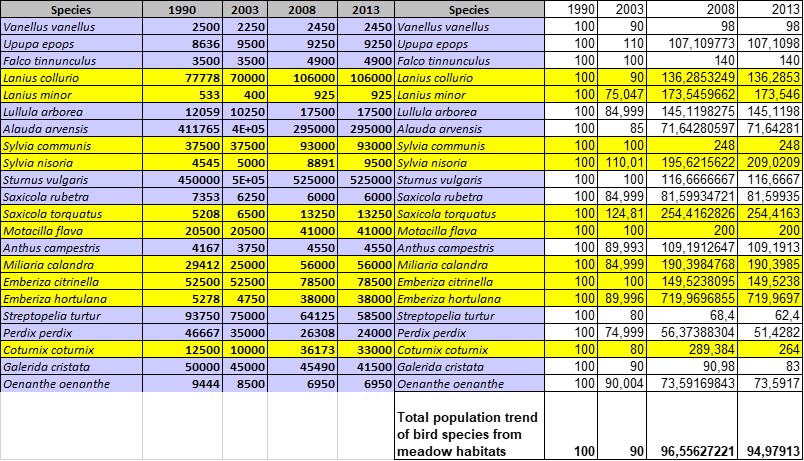