Assessment: The indicator shows the trend of the percentage cover (%) changes of red algae population in aquatic ecosystems. The change in the percentage cover (%) of red algae population indicates changes in environmental conditions in the habitat, which influences the composition of the benthic algae community in general, including red algae. One part of the data used for the production of indicators (data from 2004, 2005, 2006 and 2010) was taken from the published study (Simić & Đorđević, 2017[1]), while data from other years (2014, 2015, 2016, 2017 and 2018) were obtained by research for the needs of final papers and doctoral dissertation. The indicator was developed on the basis of data on the diffusion percentage of red algae in four springs and six rivers. Based on the available data on the coverage of red algae in four springs (the Mlava spring, the Krupaja spring, the Grza spring, the spring of the Black Timok) in Serbia, we can conclude the rising trend of population in all sources. The springs of Mlava, Krupaja and Grza are protected natural assets (monuments of nature), so an increase in the population of these algae can indicate efficiency in the management of protected areas. Further monitoring of the trend indicates that an increase of the population can be expected if the spring is not exposed to a negative anthropogenic factor. The Black Timok spring is protected from all potential threats, so in the future it predicts a stagnation or further increase in the population of this group of algae. The increase in the red algae population was also observed at the locations of Studenica, Crnovrška and Masurička rivers (Ser: Crnovrška reka and Masurička reka). The Masurička reka site is protected from all potentially negative impact factors (it is over 10 km away from the first inhabited place, and the water catchment area of this river is at least 5 km downstream of the sites where the red algae was found), so in further monitoring the trend is expected to increase the red algae population. It is assumed that a slight increase in their population is a consequence of the fact that the site is in full shade of deciduous vegetation, and the red algae recorded at this site prefer sunny habitats. In the Studenica and Crnovrška rivers, the population trend is on the rise. However, as the construction of derivative mini hydropower plants is ongoing in these rivers, further  downsizing  of  the  trend  is  expected  to  reduce  the  red  algae  populations,  and  ultimately  their  complete disappearance from the mentioned ecosystems. There is a trend of decrease of red algae populations cover on the sites of Moravica of Sokobanja, Mlava and Jelovička rivers. Negative impacts were not noticed on the Jelovička River site, except for the possible impact of tourism, so that a further reduction in the red algae population is not expected in further monitoring of the trend. On the Moravica of Sokobanja and Mlava, the derivative mini hydropower plants have been built, so the downward trend in the population is expected. Further monitoring of the trend should predict further reduction of the red algae population, and ultimately their complete disappearance from the mentioned ecosystems. 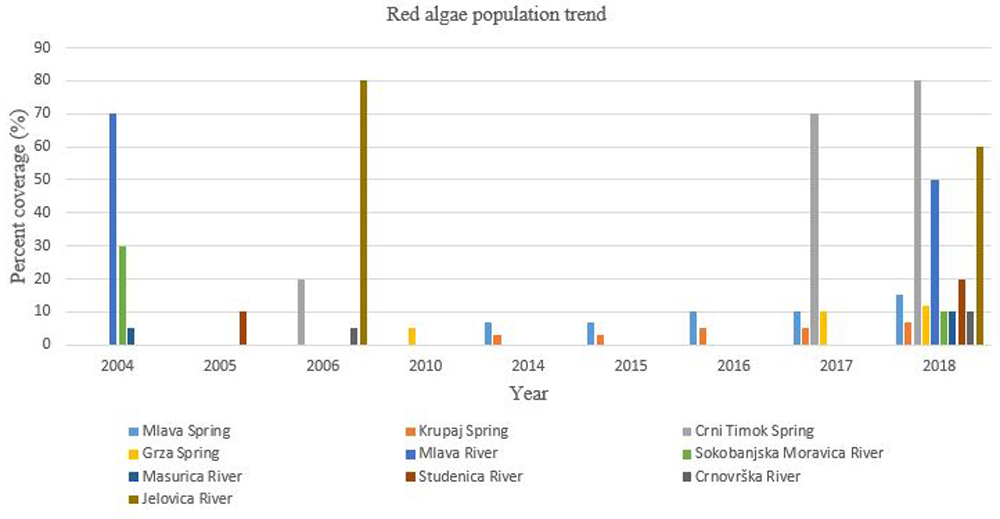 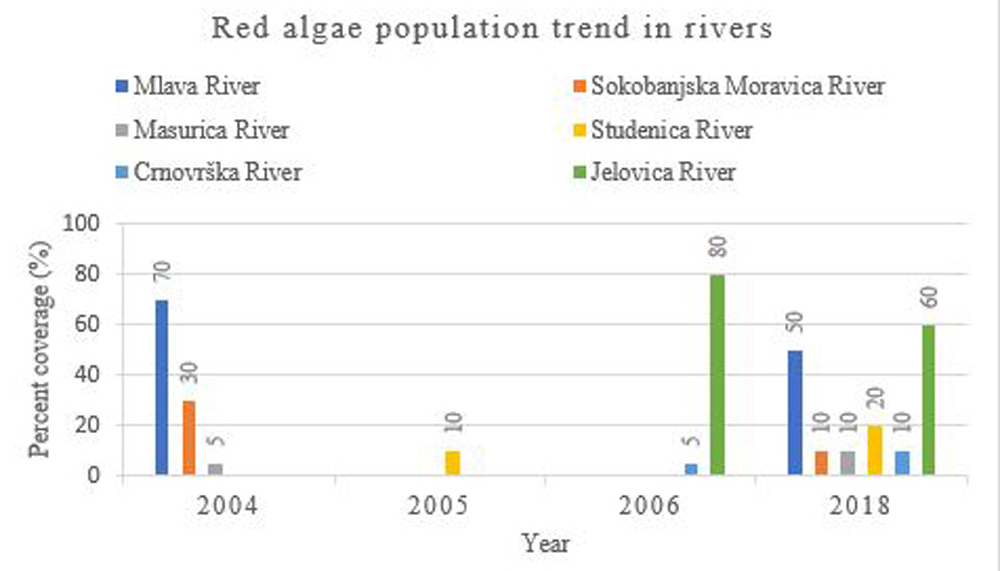 Institution/Author: Institute of Biology and Ecology, Faculty of Natural Sciences and Mathematics, University of Kragujevac/ Snežana B. Simić, Aleksandra B. Mitrović

Use of indicator: “Red algae population trend” can be used for the assessment of aquatic ecosystem stability, as well as water quality.

Scale of appropriate use: For all aquatic ecosystems, springs, streams, rivers, small ponds, from local to regional and world scale.

Meaning of upward or downward trends (“good or bad”): Upward population trend indicates that the ecosystem is stable and that there were not any significant changes in environmental conditions for a long time. Environmental conditions are favourable for red algae growth, which also mean that the water quality is good or even excellent.

Possible reasons for upward or downward trends: If habitat is not exposed to negative influences for a short or a long time, environmental condition will be stable and unchanged, which will be favourably for upward red algae population trend.

Upward trend in water pollution, as a consequence of different pressures, leads to downward trends of red algae populations. Also, in last few years, a sector of energy in our country has an upward trend in energy production from renewable sources (derivation mini hydropower plants), which automatically lead to changes in environmental conditions, due to which it comes to disappearance of red algae from this habitats, owing to their stenovalence in relation to environmental conditions.

Implications for biodiversity management of change in the indicator: Although most of red algal species are protected by the Regulation on the declaration and protection of protected and strictly protected wild species of plants, animals and fungi rule book, Appendix 1 (Official Gazette of the Republic of Serbia, 5/2010, 47/2011), they are cosmopolitan and can be used for biomonitoring purpose.

Units in which it is expressed: The percent coverage (%) per unit area.

Description of source data: Institute of Biology and Ecology, Faculty of Science, University of Kragujevac

The field investigation was carried out periodically from 2004 to 2018. Samples of macroscopic red algal thalli were collected from ten localities from Eastern, South-eastern and Western parts of Serbia. Sampling was carried out two times at six localities, three times at two localities and five times at two localities. Percent coverage (%) was calculated by visual analysis, for each 1 m interval and averaged for the whole 10 m transect; algologists and experts in this field should collect the algae and establish its percent coverage (%) on the field.

Calculation procedure: Calculating procedure for percent coverage (%) of red algae is by visual analysis, for each 1 m interval, and averaged for the whole 10 m transect. All red algae species should be used for biomonitoring survey without their destroying, because of a small sample quantity necessary for species identification; there are no constraints for aggregation.

Most effective forms of presentation: The best ways to present this indicator are tables and graphs and they provide opportunity to monitor progress regarding this indicator and to record trends observed.

Limits to usefulness and accuracy: Poor quality data; a small number of experts in this field.

Updating the indicator: Investigations on the field should be carried out every year at the same season; the surveys can be performed in 1-year intervals.

Additional information and comments: Red algae population trend offers an excellent tool for the assessment of ecological conditions of aquatic ecosystem, owing to their stenovalence in relation to environmental conditions. They are indicators of ecosystem stability and any direct or indirect negative influence can lead to degradation of their habitats and their disappearance.

According to the principles of the Water Framework Directive (WFD, 2000), water monitoring based on macroalgae as a component of phytobenthos is obligatory, but it is not yet in place in our country.