Key message: The trend of increasing the number of endangered indigenous domestic animals is on the rise

Assessment: The indicator is used to assess state of autochthonous breeds of domestic animals, in terms of their vulnerability and in connection to stimulants received per category of breeds and individuals. This assessment serves to plan future stimulants in order to maintain agrobiodiversity at a satisfactory level. The trend of the population of endangered autochthonous breeds of domestic animals is on the rise, as a result of incentives planed every year. Increased number of animals recorded, for example, cow busha and domestic mountain horses, can be explained by the fact that with these breeds there was no identification of animals on the ground. Additional monitoring in the field is needed. It is evident that from 2014 some of the domestic animals have rapidly increased in terms of number, such as “mangulica” pig, due to increased interest for their growth for consumption as delicious food. 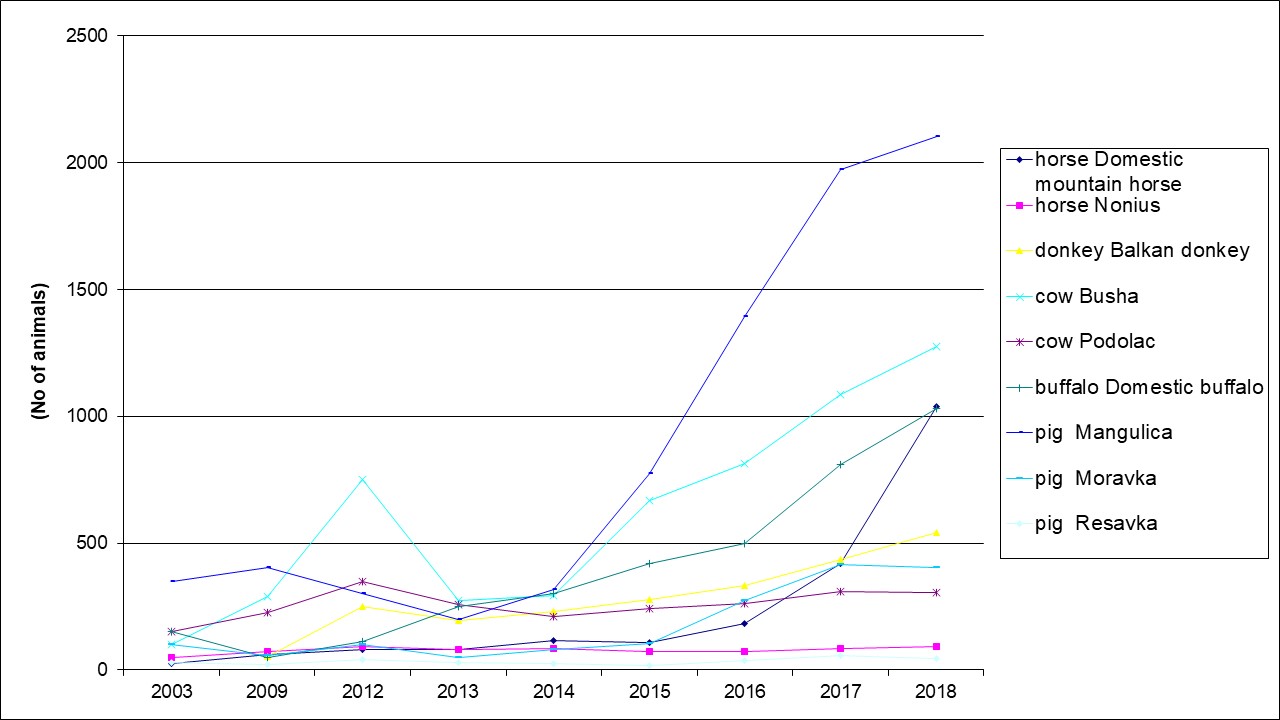 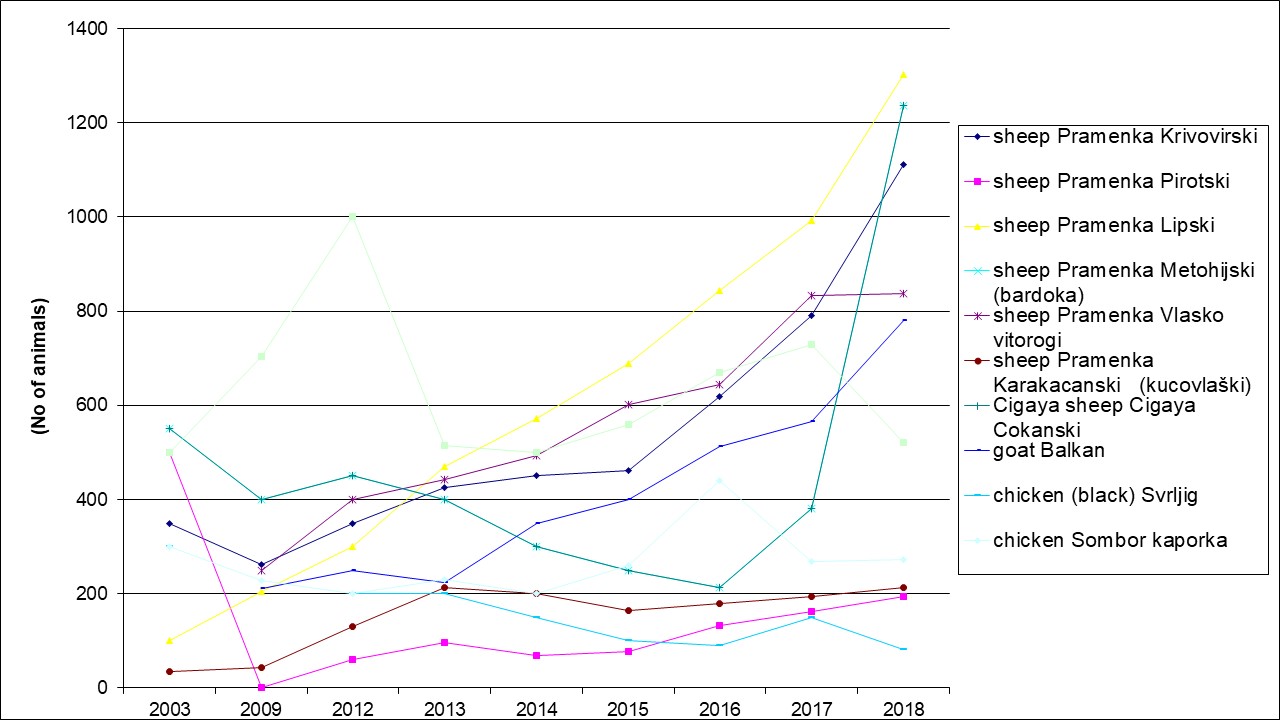 What is the degree of vulnerability of autochthonous breeds of domestic animals? What is the main impact on trend recorded?

The indicator is used to assess state of autochthonous breeds of domestic animals, in terms of their vulnerability and in connection to stimulants received per category of breeds and individuals. This assessment serves to plan future stimulants in order to maintain agrobiodiversity at a satisfactory level.

The indicator was prepared on the base of number of registered animals per year, based on stimulants defined every year for each autochthonous breeds.

Meaning of upward or downward trends („good or bad“)

Based on the Rulebook on incentives for the conservation of animal genetic resources (Official Gazette of the Republic of Serbia No. 83/2013, 35/2015, 28/2016 and 104/18), support for a sustainable rural development program is aimed at improving the protection of the environment and preserving indigenous breeds of domestic animals, and the program of measures for the conservation of animal genetic resources. This Rulebook defines list of animal species, breeds and strains as genetic resources, categories of user that can submit request for incentives and maximum amount of incentives per user. Trend in number of breeds depends on level of incentives prescribed by this Rulebook.

The trend of the population of endangered autochthonous breeds of domestic animals is on the rise, as a result of incentives planed every year, under the Rulebook mentioned above. Increased number of animals recorder for example at cow busha and domestic mountain horses, can be explained by the fact that in these breeds there was no identification of animals on the ground. Additional monitoring in the field is needed.

The indicator has been described based on data collected by the Ministry of Agriculture, Forestry and Water Management, in order to show potential of animal genetic resources.

Number of animals per breeds per year

Data was provided from the data base managed by the Ministry of Agriculture, Forestry and Water Management, based on calculation according to the Rulebook on incentives for the conservation of animal genetic resources.

(include appropriate methods and constraints for aggregation):

Calculation is done on the yearly bases, as number of registered breeds. The incentives prescribed based on Rulebook on incentives for the conservation of animal genetic resources is used to explain trends recorded.

Chart / graph is the most appropriate form of indicator presentation

Some data should be checked and approved after additional monitoring in the field.

(how often? What is the process?)

The indicator is updated every year. Data are extracted from the database managed by the Ministry of Agriculture, Forestry and Water Management.

Based on the data contained in the Draft Programme of Rural Development (2008-2013), significant presence of more than 44 autochthonic and exotic races of domestic animals has been noted in Serbia (7 races of horse, 1 race of donkey, 8 races of cows, 3 races of goats, 5 races of sheep, 18 races of pigs and several races of poultry). Between 400 and 500 of agricultural husbandries and associations own endangered species. The FAO information system for domestic animals diversity (DAD-IS) contains information about the presence of more than 100 races and sorts of domestic animals on the territory of the Republic of Serbia.

Ex situ and in situ activities are applied with an aim to conserve these races and sorts, whereat basic emphasis is put to the so-called on farm conservation that includes active role of agricultural husbandries.

The diversity of species that dwell in natural fields (meadows and pastures) has not been well studied or estimated, but number of species within the described 273 plant associations has been estimated at more than 1,000. Total number of medical and aromatic plant species in our flora is about 700, out of which 420 have been officially registered. 280 of these are traded as commodities. Honey plants are primarily found in meadow, forest and agro-ecosystems, and their number in our country has been estimated at approximately 1,800. In most general sense, flora agro-biodiversity includes weed and ruderal plants as agro-ecosystem components. The studies conducted to date on weed flora diversity in Serbia reveal that the number of weed species represents 28% of the total flora (more than 1,000 species).

Areas under forests in Serbia include combination of deciduous forest (beech and oak), in the percentage of about 60.7%, conifer forests, in the percentage of 4.7%, and mixed deciduous-conifer forests, which cover 33% of the area. With regard to autochthonic forest genetic resources, greatest value is seen in endemic and endemo-relict species (Pinus peuce, P. heldreichii, Pinus nigra ssp. gocensis, Picea omorika, Taxus baccata, Prunus laurocerasus, Acer heldreichii, Fraxinus pallisae, Forsythia europaea, Corylus colurna, Daphne blagayana, D. mesereum and others). Within forest genetic resources, in addition to the natural rarities, great importance is given to wild fruit species. Eighty-eight species of wild fruit have been identified within the natural forest associations of Serbia, 12 of which are endangered species.

Among genetic resources of medical and aromatic herbs, greatest importance is given to genetic diversity of commercially important species (chamomile, mint, sage, hypericum, yarrow, oregano, bearberry, valerian, plantain, primula, etc.), as well as to sorts of limited areals and to those that are for some reason endangered. Looking at the genetic resources of medical and aromatic herbs and the need for their conservation, coordinated monitoring activity, which would look into the status of their populations, has not been implemented for a long time, while general conservation strategy at national and international levels have not been developed yet. This is one of the main reasons for the recommendation related to establishment of ECPGR Working Group for Medical and Aromatic Herbs (1999).

The wild relatives are of particular importance as genetic resource in improving and selecting cultivated plants, especially at the level of resistance to various abiotic and biotic stressful external factors. More than a half of cultivated plants have direct relatives within forest and herbaceous plant associations. As far as it is known, there have been no attempts to develop inventory and perform characterization of these genetic resources in our country, except for wild relatives of fruit species. 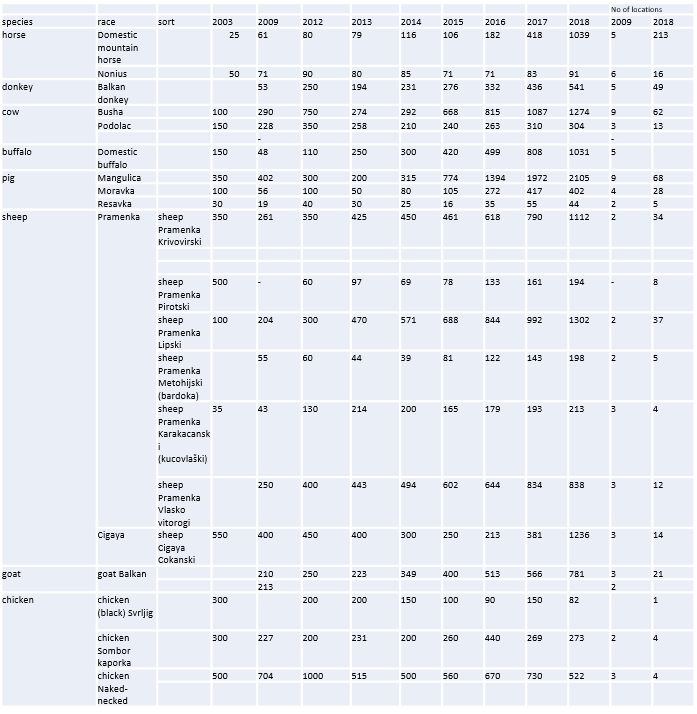