Key message: The number of invasive species of insects in Serbia is on the rise

Assessment: By reviewing the entry into the online insect database of Serbia “Alciphron”, the total number of invasive insect species at the moment is 30. When we look at the earlier data, we will see that the number in 2009 was only 10 insect species, in the following years the number varied and was mainly increasing. Exceptions are 2012 and 2016, when the number dropped compared to the previous ones, but it is most likely a consequence of overseeing the factual state, and not the actual disappearance of one species from the territory of Serbia, due to the lack of targeted research into invasive insect species, and possibly a small number of individuals of the given species. It is very rare that the invasive species disappears from the habitat by itself. This data shows clearly that the number of invasive insect species in Serbia is on the rise, and suggests that it is necessary to compile a list of priority invasive species, as well as to develop a strategy for controlling the influx of invasive species, preventing their spread and defining measures for the protection of autochthonous biodiversity. 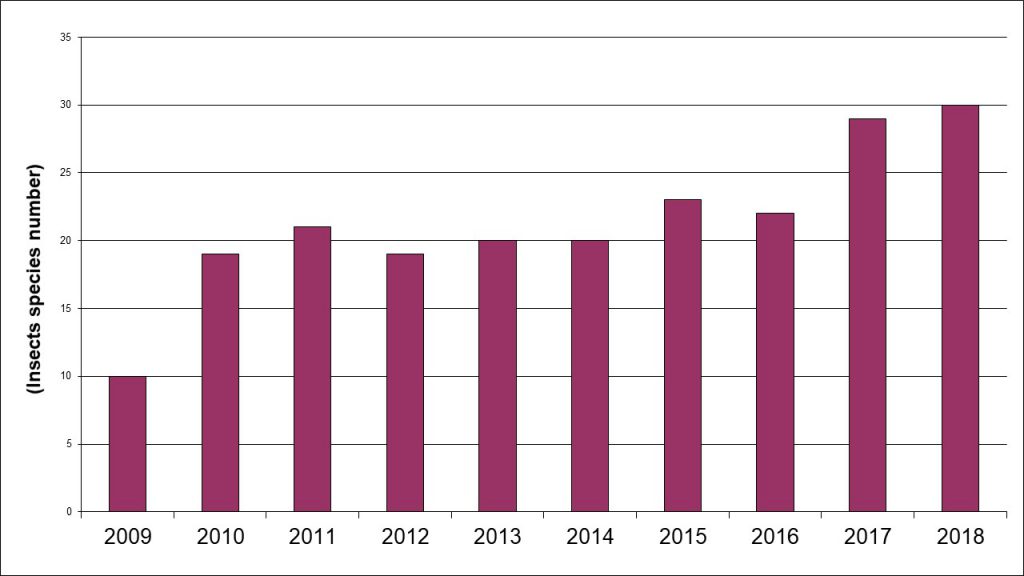 Use and interpretation: The indicator shows a change in the number of invasive insect species for the period from 2009 to 2018. The change points to possible threats to biodiversity of our country, indirectly to the presence of negative anthropogenic factors in the ecosystems.

Key question(s) which indicator helps to answer: What is the number of invasive species per year for a period from 2009 to 2018?

Upward – The presence of negative anthropogenic factors (on purpose or unintentional introduction of an invasive species into the ecosystem). Undeveloped or insufficiently developed biodiversity protection measures and control measures of invasive species.

Implications for biodiversity management of change in the indicator: The indicator can serve in the assessments of biodiversity-endangering factors, as well as in the process of developing and planning strategies for action against invasive species.

Units in which it is expressed: Number of species per year.

Description of source data: Online database on insects in Serbia “Alciphron” (http://www.habiprot.org.rs/Alciphron/), period from 2009  to 2018, number of species per year.

Calculation procedure: Numbers were obtained by exporting a set of data from the “Alciphron” database, which gives us the number of invasive species per year. The base itself is the software that gives us the option of export of such data.

Additional information and comments: Invasive species are one of the key factors for the destruction of biodiversity. They are mostly superior to native species and very quickly spread their area and populations. In order to eliminate invasive species from the ecosystem, it is most important to react in the initial phases of the invasion, then a control measures are most effective. In order to know when to react, the most important thing is to have a constant monitoring of biodiversity status.