Key message: Increase in the number of healthy trees

Assessment: The indicator is used to monitor forest health conditions through the trunk defoliation indicators in the frame of ICP Forests Monitoring Network. Monitoring of the health conditions of forests is based on the loss of leaves on trees in forests in each of defoliation classes: “none”, “slight”, “average”, “strong” and “dead wood”. There is also monitoring of health conditions according to changes in colour of leaves on trees in the forests in each of decolourised classes: “none”, “slight”, “average”, “strong” and “dead wood”. When looking at healthy trees, about 90% of coniferous and deciduous trees did not have or had a weak defoliation. Defoliation was not registered on 92.4% of fir trees, 91.6% of spruce trees, 91% of white pine trees and about 40% of black pine trees. Moderate and strong defoliation involves about 43% of black pine trees. Of the deciduous species, 85% of hornbeam trees, 81% of oak trees, 73.2% of beech trees, 71% of Austrian oak and 65.2% of sessile oak trees had no defoliation. Moderate and weak defoliation of the deciduous species was increased in relation to 2017. In 2018, an assessment was made of the condition of forest species on 130 sample plots, to a total of 2,968 trees. During 2018, no drying of trees of coniferous species was recorded, while 0.1% deciduous trees were dried, but there was an increase in strong defoliation of coniferous species by around 30%, and deciduous species by about 50% compared to 2017. 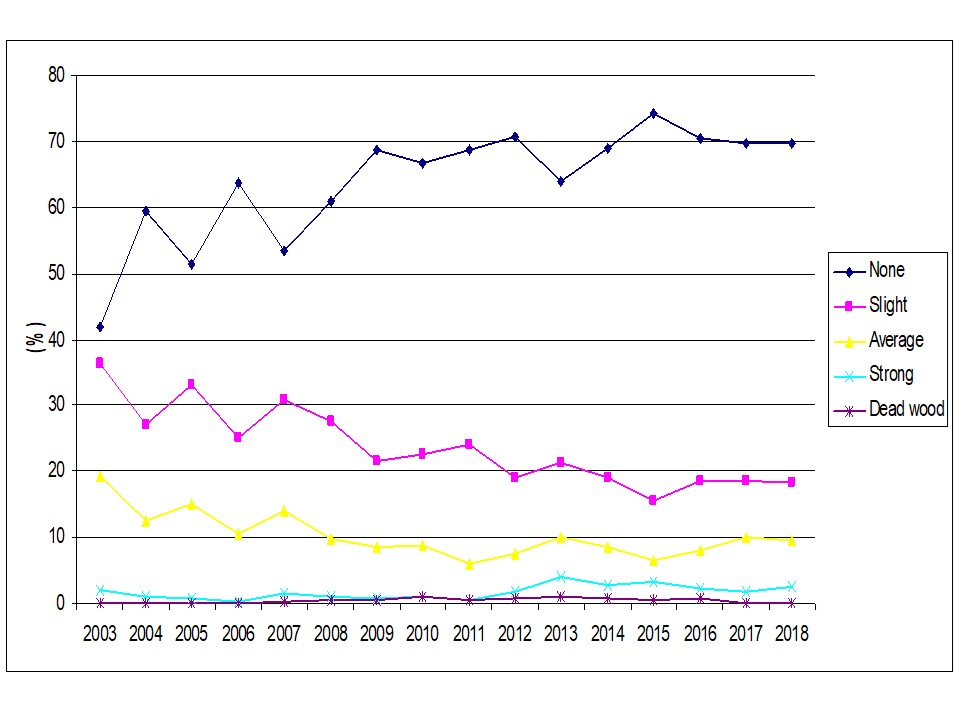 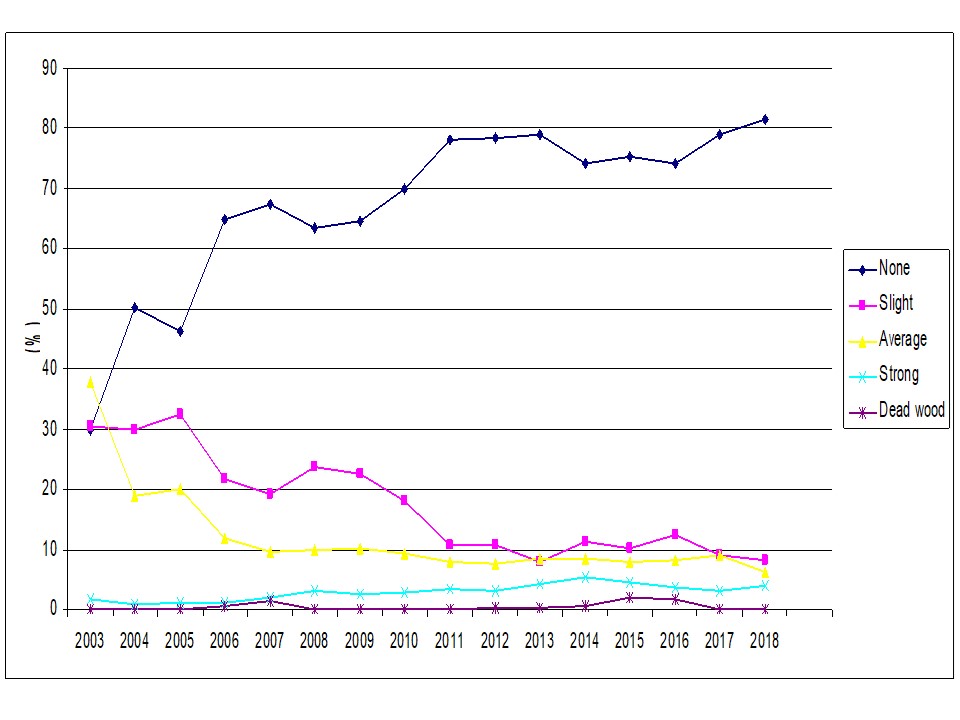 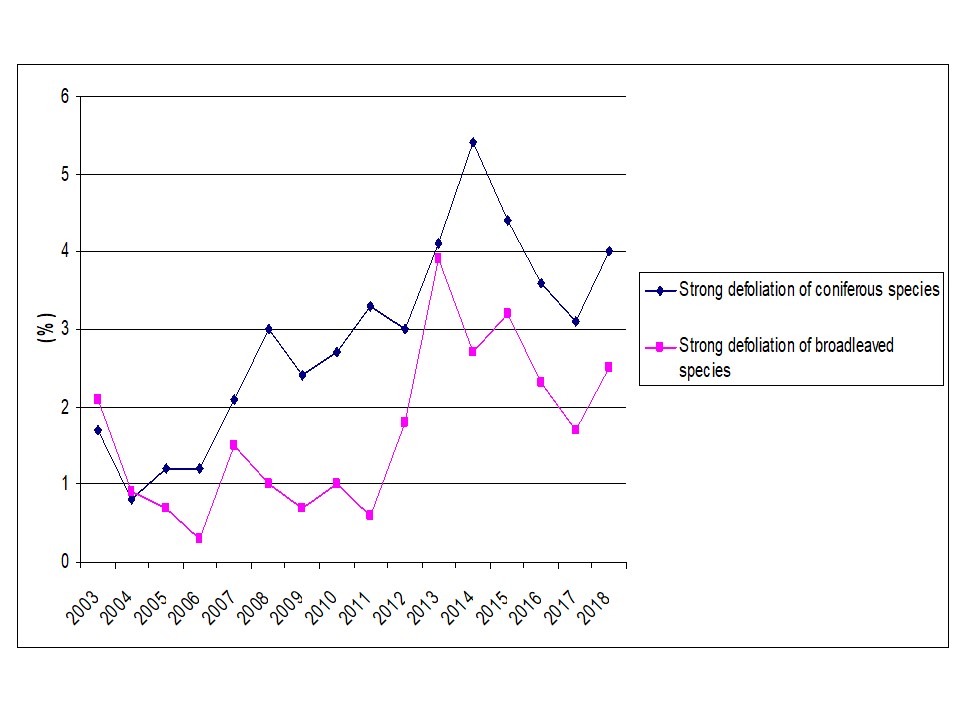 The indicator is used to monitor forest health conditions through the trunk defoliation indicators in the frame of ICP Forests Monitoring Network.

The indicator helps to answer the question: What is the health conditions of forests?

Monitoring elements are defined according to the criteria of ICP Forests monitoring. The percentage of damage (%) by classes: “none”, “slight”, “average”, “strong” and “dead wood” of the main tree species in the forests.

In 2016, assessment of forest species state was done at 130 bio-indication points on a total of 2,973 trunks. Comparison was done between 2004 and 2016 based on observed defoliation of conifer species, dead trees and dried trees.

By looking at the figures for this thirteen-year period, we can observe that conifers had the highest values of defoliation in 2004 and 2005 and broadleaves in 2005 and 2007. In conifers, the last three years were almost uniform in the number of trees affected by the same category of defoliation. On the other hand, broadleaved species showed much stronger fluctuations in the number of trees in each category of defoliation, thus it is difficult to speak about any regularity. After the most favourable year of 2015 (with the highest percentage of trees with no signs of defoliation), the percentage of trees in different defoliation classes was back to average in 2016.

In 2016, hornbeam and Hungarian oak proved to be the most resistant species, with small differences in the number of trees per defoliation categories. No defoliation was observed in 85.7% of hornbeam trees and 85.5% of Hungarian oak trees. As was the case in the previous years of monitoring, the most vulnerable species was sessile oak with only 56.4% of trees without any signs of defoliation. A slightly higher percentage (57.3% of trees with no signs of defoliation) was observed in the category of other broadleaved species.

Defoliation (needle loss) in 2016 was not registered in 85.5% of spruce trees, 84.6% of Scots pine trees and 79.4% of fir trees. The data on the defoliation of spruce are the only data that significantly deviate from these fairly uniform results. There were no spruce trees affected by severe defoliation and only 3.5% of them suffered moderate damage. As it was the case in the previous years, Austrian pine again proved to be most vulnerable species, since only 35.8% of Austrian pine trees were not affected by defoliation.

The indicator is traditionally described in the annual state of the environment reports in Serbia, and it is determined as biodiversity indicator, according to the Rulebook on the National list of environmental protection indicators (Official Gazette of the Republic of Serbia No. 37/2011).

According to the criteria of ICP Forests monitoring.

The best way to present this indicator is a graph. 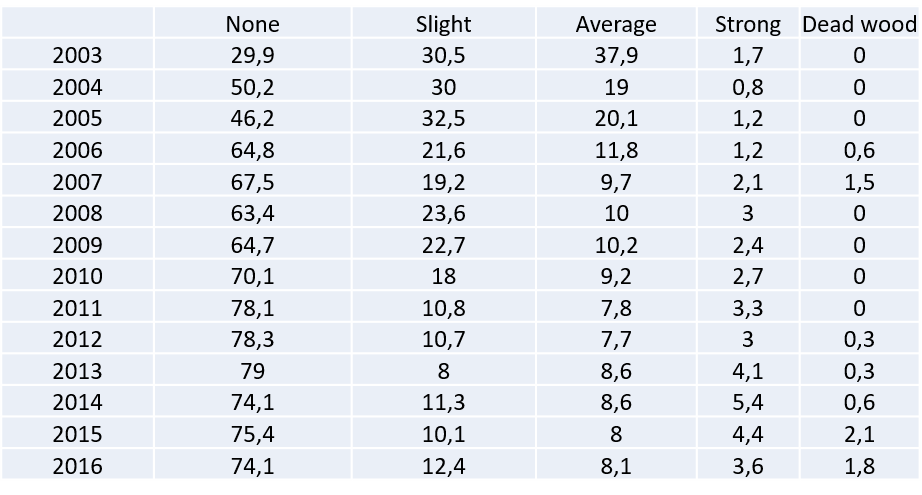 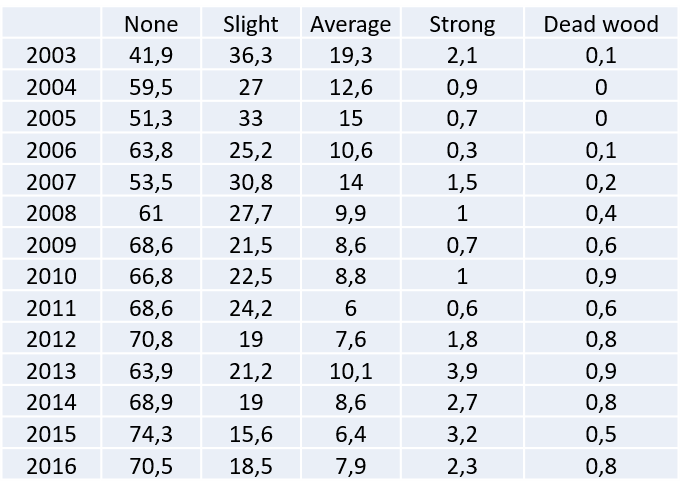