Key message: Increase in damage from natural disasters and insects

Assessment: The indicator shows level of damage to the forests, broken down by selected biotic, abiotic and anthropogenic agents. The indicator is used to express level of damages and to compare which agent has the most expressive effect. In 2011 and 2012 man-made damage was the most expressed, while in recent year damage caused but natural disasters increased several times. Agents causing damage to the forests are biotic, abiotic and anthropogenic. Biotic agents include insects and illnesses, wild animals and forest grazing cattle. Abiotic agents include fire, storm, wind, snow, drought, layers of mud and avalanche. Anthropogenic agents include illegal logging or other damage in forests caused by wood cutting, which leads to impaired health and vitality of forest ecosystems. During 2017 human damages in forest increased. Over 25,000 cubic meters of wood were illegally harvested, especially in the region of southern end eastern Serbia. Insects damages decreased for about 30% and natural disaster damages decreased for about 5%.

Picture: Damage to the forests broken down by agents

The indicator shows damage registered in forests and other forest land, and / or wood volume on which damage is caused by the following agents: man, insect pests, natural disasters.

The indicator helps to answer two questions: Which agents cause higher damages in the forests? What is damage intensity?

Meaning of upward or downward trends („good or bad“)

Man-made damage increased by about 20% in 2017, compared to 2016. The pressure on the forests was also maintained by intensive tourism and recreation activities which caused forest fires, pollution and destruction by air pollution, traffic or grazing cattle.

The indicator is traditionally described in annual state of the environment reports in Serbia, and is determined as biodiversity indicator, according to The Rulebook on the National list of environmental protection indicators (Official Gazette of the Republic of Serbia No. 37/2011).

The indicator is expressed in hectares (ha) or cubic meters (m3)

Methodology according to the criteria of ICP Forests, UNECE / FAO, DG Environment. Methodology defined by the Republic Statistical Office.

The best way to present this indicator is a graph.

The data are obtained by the complete coverage of the reporting units of the Statistical Office. The accuracy of the data can be assessed as satisfactory. Precision depends exclusively on the delivery of data by all forest users. 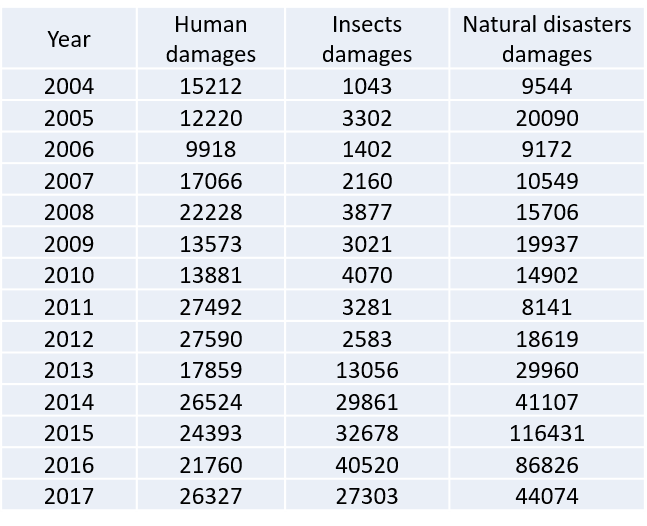