Assessment: The indicator shows trends of change in population abundance of selected butterfly species from forest and meadow habitats. The change in the population of butterfly indicates the loss, but also changes in the structure of their habitats, due to fragmentation and isolation, as well as other changes in the environment that directly or indirectly affect the change in population structure. It is shown that population of butterflies in meadow habitats were more stable in the period from 2014 to 2017, while in forest habitats the oscillations in population dynamics were more evident.

Data provided cover 15 species of butterflies found in forest and meadow habitats, used from “Alciphron” data base, for the period 2003-2017. For the entire territory of the Republic of Serbia, relatively small deviation in the number of both forest and meadow species was observed. According to these estimates, the trends of forest species are on a slight increase, with the maximum values in 2004, 2011, 2015, and 2017. In 2008, the largest increase in population was recorded for meadow species, while for forest species the greatest decrease was recorded in 2018. The analysis shows a decrease in the number of population of species in meadow and forest habitats in the north of the country, while there is a significant increase in the number of population of butterflies in the south of the country. 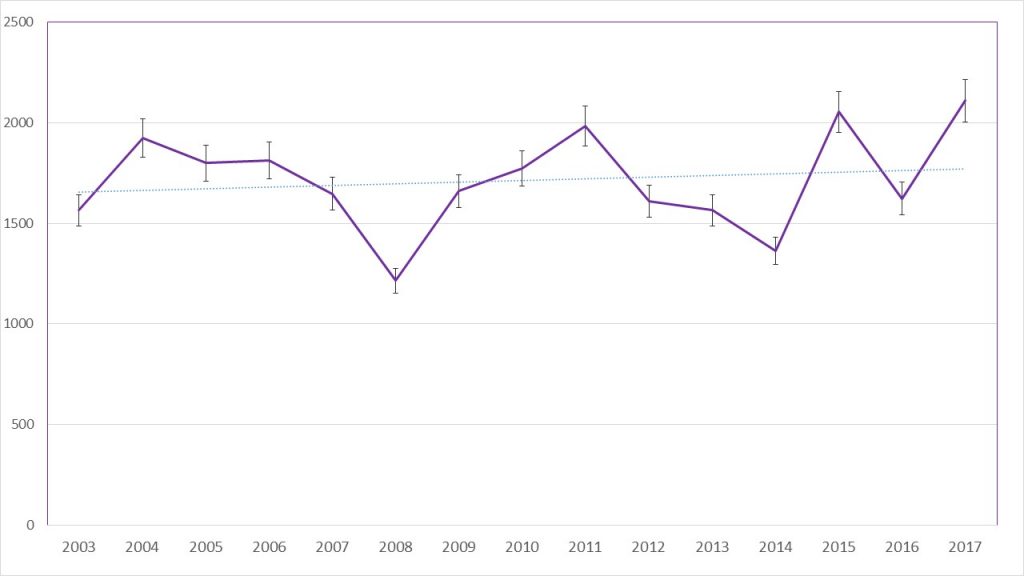 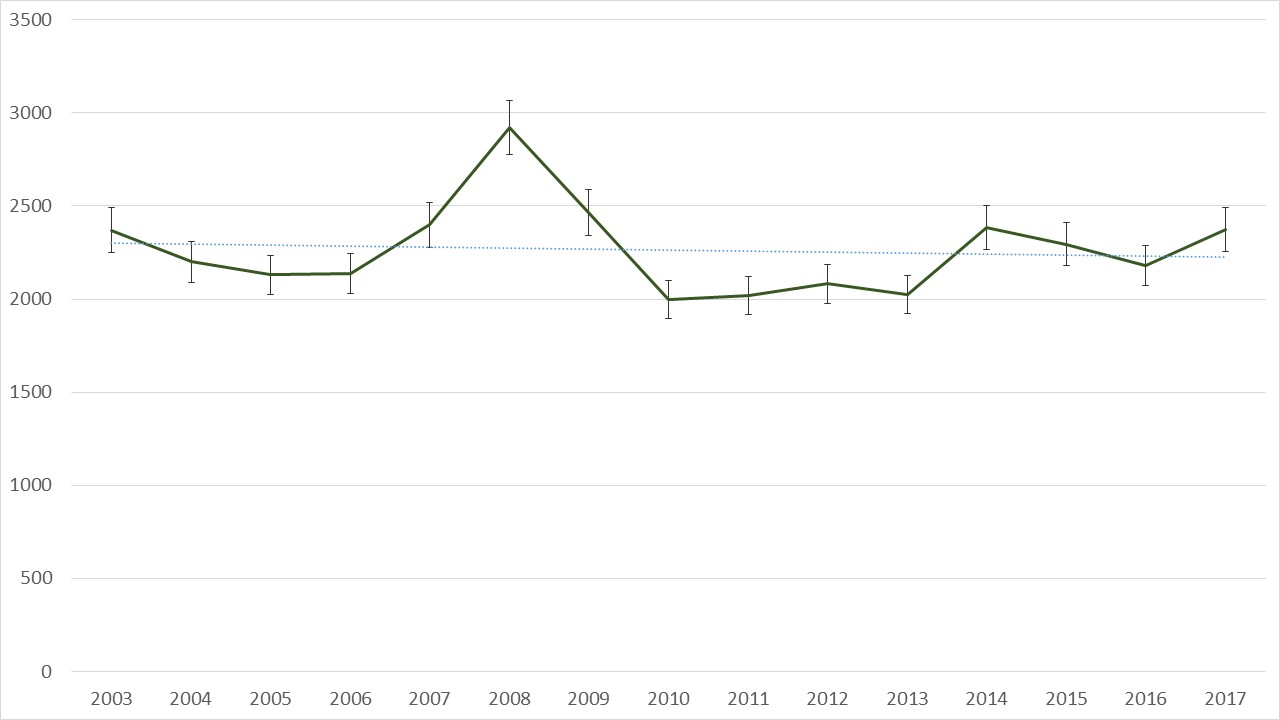 The indicator helps to answer the question: What is the trend in population growth of selected butterfly species in two habitats: forest and meadow?

The indicator is used to monitor population growth of selected butterfly species.

Monitoring of the growth rate of butterfly populations started in 1990 and data were collected continually from 1990 to 2002. An increase in numbers in only 5 forest butterfly species (10 %) was observed. There is no clear link between changed habitat surfaces and population growth trend, taking into account that forest habitats were stable or shown trend of surface increase, while only 3 species of meadow butterflies showed an increasing population growth rate. Most species have a stable population growth rate.

Number of population of selected butterfly species and population growth through the time and by habitats. Changes of the most important types of habits, according to CORINE Land Cover and EUNIS.

The periodicity of data collection: Institute for Nature Conservation of Serbia, and HABIPROT collect and analyse data.

The indicator also relates to trend in changing of the most important types of habitats according to CORINE Land Cover and EUNIS, which means dynamics of changes in the area of forest, meadows, mixed and other types of habitats.

The indicator is determined annually, and it is important for monitoring population growth of selected butterfly species in two habitat types: meadows and forests.

The indicator is traditionally described in annual state-of-the-environment reports in Serbia, and it is determined as biodiversity indicator, according to The Rulebook on the National list of environmental protection indicators (Official Gazette of the Republic of Serbia No. 37/2011).

The number of individuals per unit area. Surface in hectares (ha).

Institute for nature protection of the Republic of Serbia

Institute for the nature protection of the Vojvodina Provence

Trend in changes of population abundance of selected species of butterflies according to the expert and administrative lists and methodology of counting and assessment developed by the European Agency for Environmental Protection. Dynamic of habitat changing of habitats according to EUNIS classification and / or the CORINE Land Cover methodology.

Limited scope for updating, due to limited access to information

The Ministry of Agriculture and Environmental Protection financed a project “Enlargement of the Butterfly Accounting Network in Serbia”. Starting from December 2014 there is a website that serves as the user interface of the Alciphron database (http://alciphron.habiprot.org.rs/index.html). The site was intended for butterfly data collection, but currently, data base is consisted also of data about Orthoptera, Hemiptera, Odonata, Coleoptera and other insects. This database is very useful for protection of species and areas, as almost all data is georeferenced. Although it does not contain explicit information on the population growth rate, some information can be obtained indirectly, such as frequency of findings related to some species as opposed to the total number of registered data can indirectly give the points how large population of such species is.