Key message: In Serbia there is a declining trend of air pollution with potentially toxic elements

Assessment: The bio-indicator species of moss Hypnum cupressiforme is used in Serbia for the research of air quality in non-urban/rural areas (so-called passive bio-monitoring). In Serbia, there was a declining trend of air pollution with potentially toxic elements in the period from 2000 to 2015 (a potential cause: the cessation of the operation of numerous industrial plants).

Spatial distribution of element concentrations in the moss across Serbia in 2015 highlighted the southern part of the country (territory of Kosovo and Metohija) as the most loaded with the elements, especially As, Cd, Cr, Ni, Pb, Sb, V and Zn. This area is characterised by complex geological settings, followed by mining, and the other related activities. Besides, the highest concentrations of Cu found in the region of the copper-mining basin in the north-eastern part of Serbia.

Figure 1: Concentration of heavy metals in mosses as indicators of air pollution per element 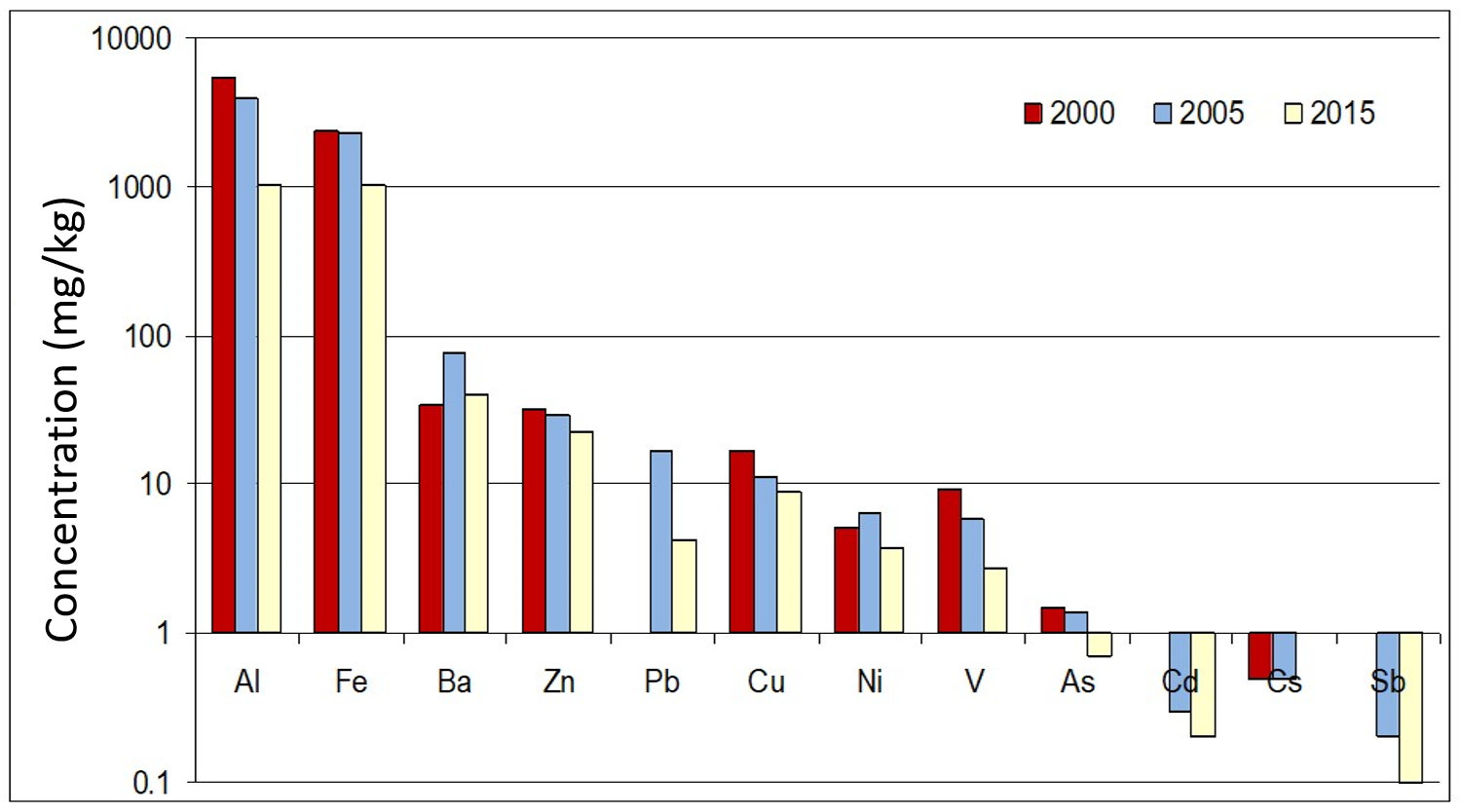 Figure 2: Concentration of heavy metals in mosses as indicators of air pollution per years 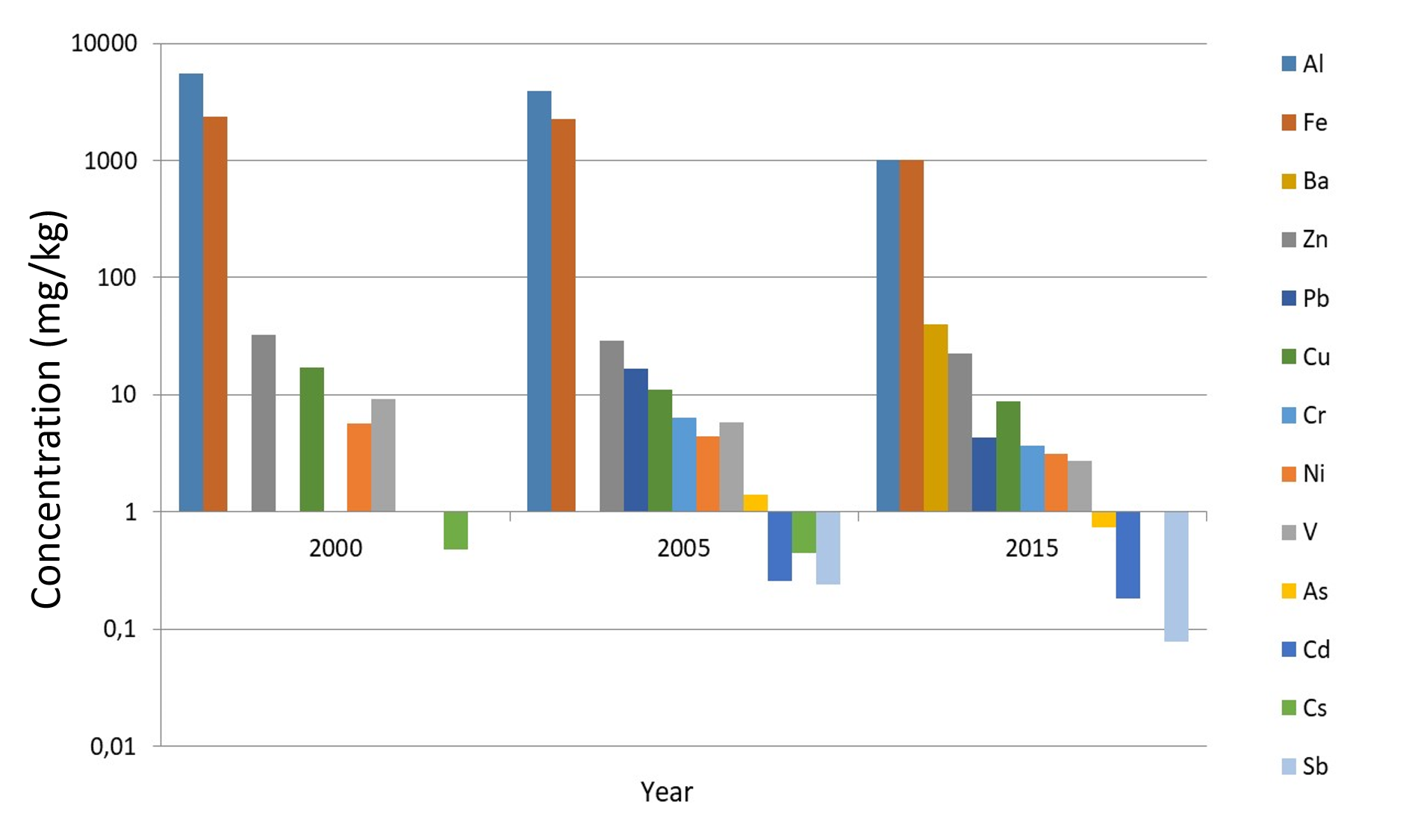 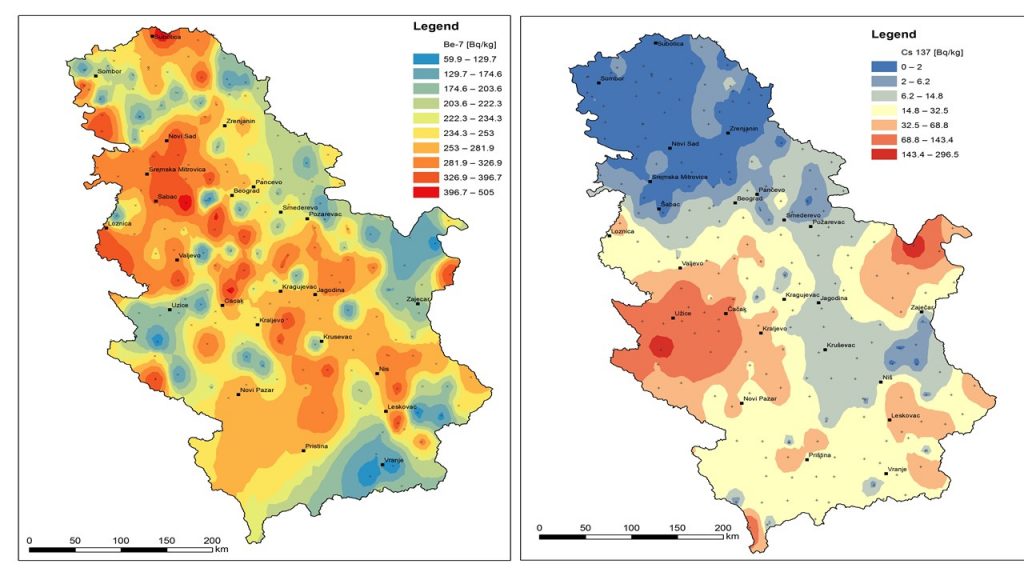 Key question(s) which indicator helps to answer: Level of air pollution in sub-urban and rural areas

Use of indicator: Passive biomonitoring of air pollution

Scale of appropriate use: Concentration of elements (mg kg-1) in mosses Hypnum cupressiforme at the territory of the Republic of Serbia, in the period 2000-2015

Possible reasons for upward or downward trends: closing or inactivation of mining and the other accompanied activities

Units in which it is expressed: mg kg-1

Calculation procedure: Every five years, from the same sampling sites across the country, the samples of Hypnum cupressiforme are collected. The upper green part of the moss (related to the 2,5-3-year-old segment) was analyzed and provided information about the presence of potentially toxic elements and radionuclides. Since mosses naturally feeding on the air (via phylloid and cauloide), the element content measured in moss tissue reflects their ambient air concentrations. Passive moss biomonitoring implies repeating the moss sampling and element measurement according to the strict procedure provided by the Monitoring manual  (https://icpvegetation.ceh.ac.uk/sites/default/files/ICP%20Vegetation%20moss%20monitoring%20manual%202020.pdf)

Most effective forms of presentation: Maps and graphs

Limits to usefulness and accuracy: Applicable in sub-urban and rural areas

Updating the indicator: Every five years

Map: The mean element concentrations (mg/kg) in moss H. cupressiforme across Serbia in 2015-2016. 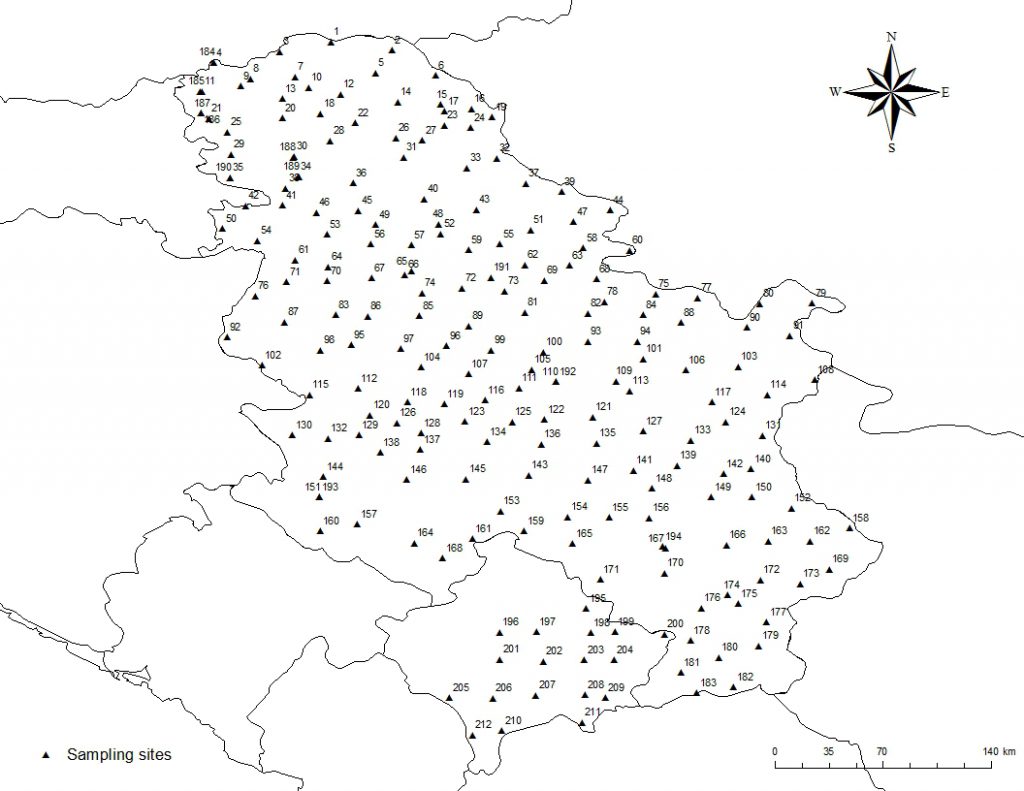 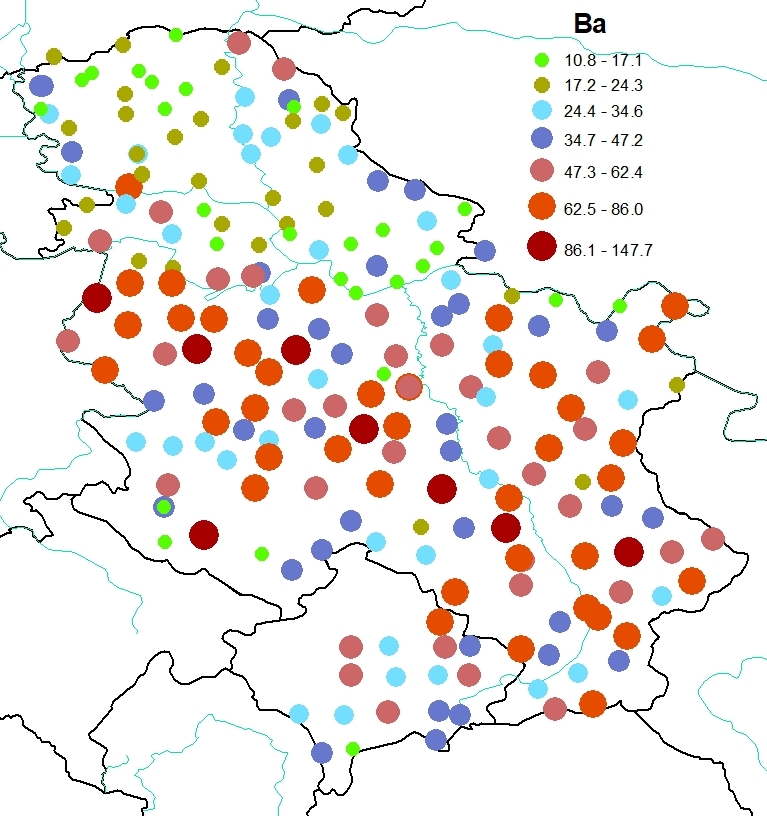 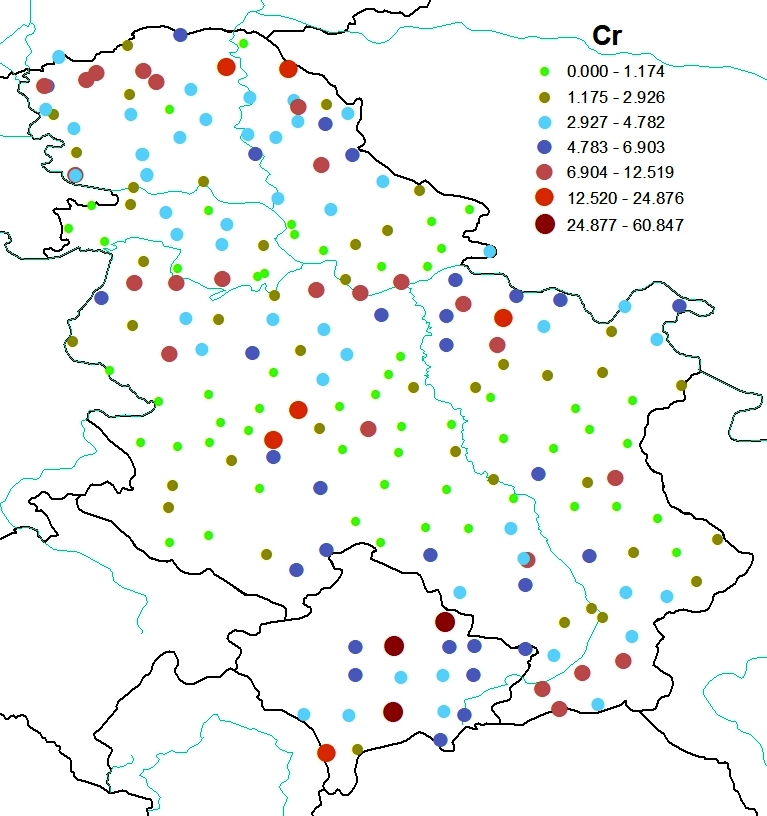 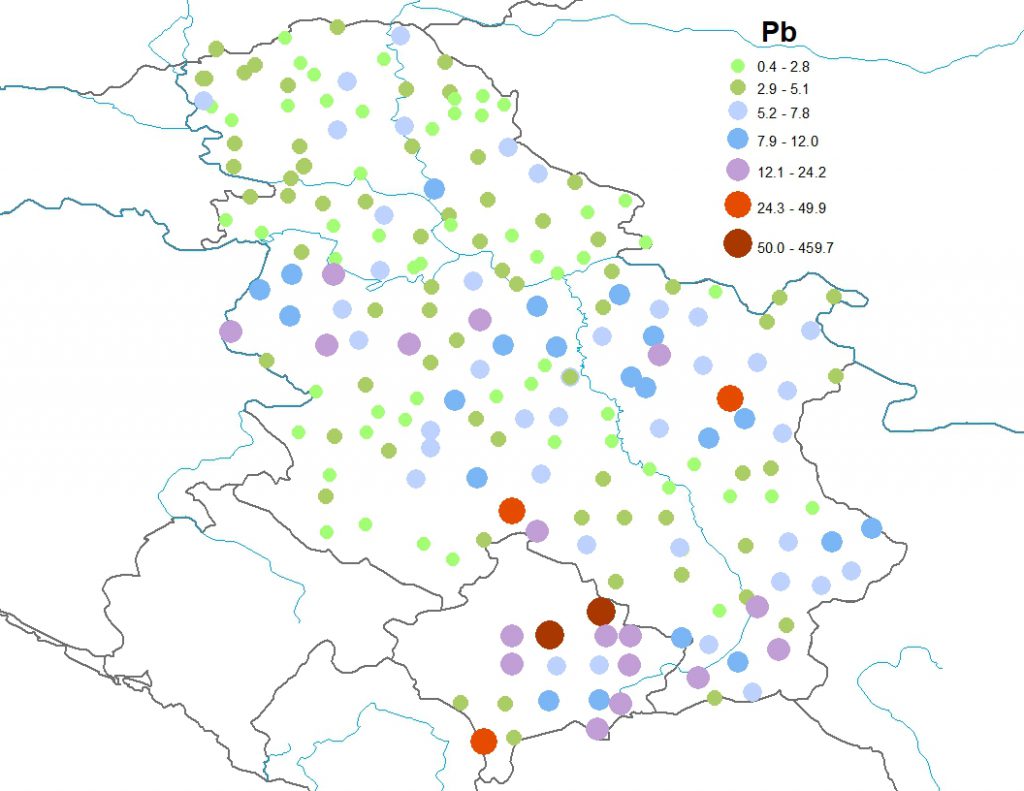 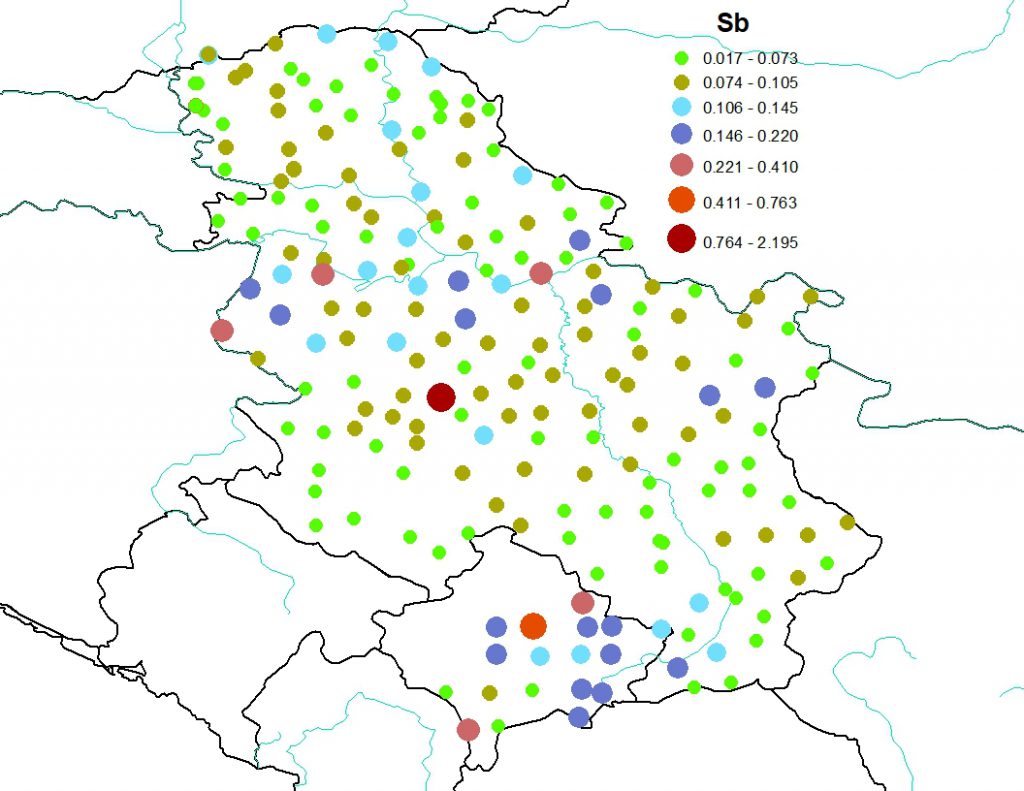 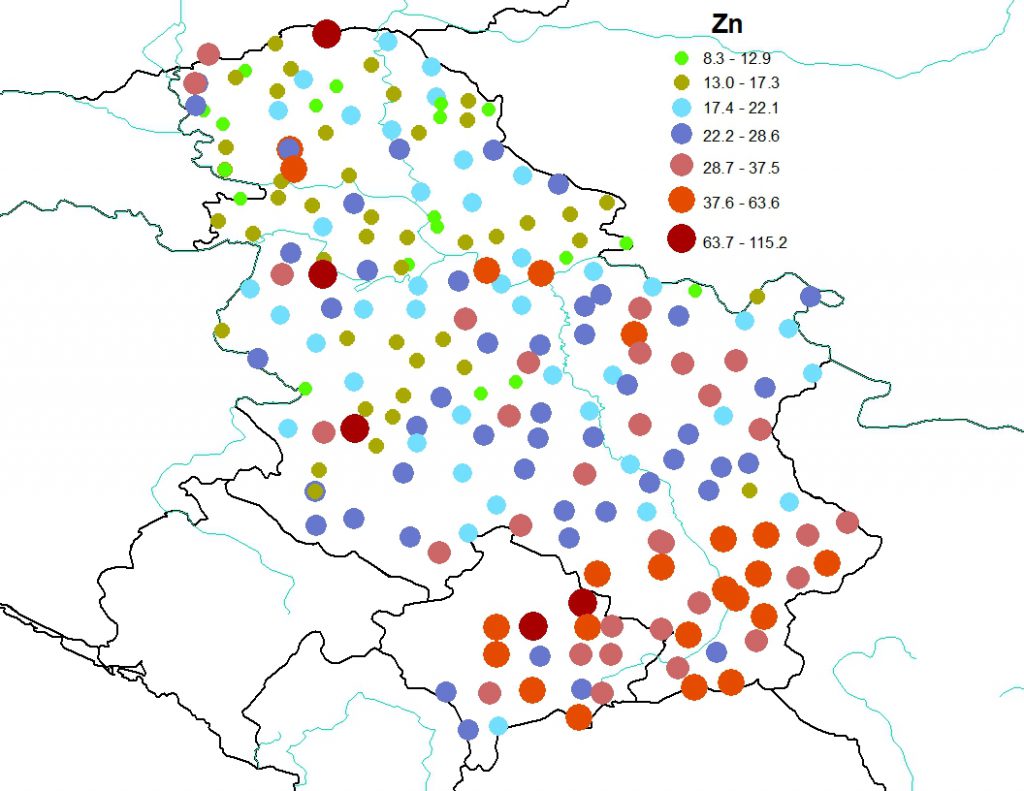