Golija-Studenica BR is the first established Biosphere Reserve in Serbia. Formed in 2001 around both exceptional natural values of Golija Mt., protected also nationally as Golija Nature Park, and significant cultural heritage of Studenica Monastery (XII century), which was listed as the World Heritage Site in the Category of Cultural Heritage by UNESCO in 1986.

Over 70% of Golija NP has been designated for Golija-Studenica BR, with the large majority of most valuable localities, both in cultural and natural aspect, included in its approx. 54.000ha of size (Figure 1). Well-preserved forests take up the majority of both NP and BR area.

With the altitude of 1833 m a.s.l., Golija Mt. is the highest mountain of Southwestern Serbia. Rich in water, with many springs, streams, rivers and peat bogs, it hosts diverse and for the most part, undisturbed habitats of high biodiversity. Alike many high mountains of the Balkan Peninsula and of the Western and Southwestern Serbia, Golija Mt. possesses strong refugial character. Its unique complex of microrefugia supports survival of many endemic and relict species of flora and fauna.

Figure 1: Map of Golija-Studenica BR and Golija NP with their location in Serbia (Source: INCS) 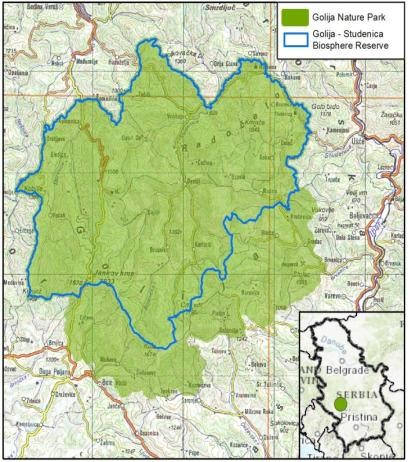 North of the Golija mountain ridge, well-preserved and old-growth forests of mainly Oak, Beech, Fir and Spruce dominate the landscape and represent the climax potential vegetation (Figure 2). On the southern slopes of the mountain, vegetation of mountain fields, pastures and meadows develops as a secondary vegetation type, the result of both abiotic and anthropogenic factors influence. 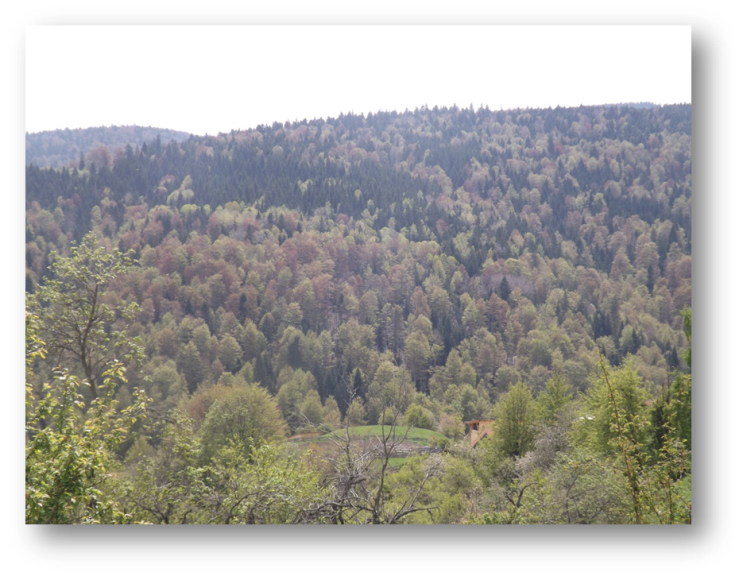 Within the Nature Park area, about 8,000 people reside in 36 rural settlements under 5 Municipalities. Despite depopulation trend in the last decades in this mountain area, it is still very much alive. The local way of life has not changed significantly over the years, with the traditional livestock rearing and crop production practices still preserved.

Sustainable use of forest for timber production is the dominant use of natural resources in the BR. Gathering of nature products, such as fruits, herbs and fungi is widely practiced in this mountain region, both by the locals and the organized commercial harvesters. Eco-tourism, related to natural values, wild nature and beautiful landscape, and ethno-tourism are both developed.

With all the human activities in the BR, especially the ones taking place in heavily forested regions of the Golija Mt., a dose of risk is associated, due to pure wilderness of this mountain, which was for centuries known as both Grey wolf and Brown bear roaming territory.

Brown bear (Ursus arctos) is the largest Carnivore in Serbia and in Europe. Constantly decreasing population trends in XX century have resulted in near endangerment of this species in Serbia, as well as in Europe.

Three out of 10 Brown bear populations in Europe are present in Serbia (Figure 3). Europe’s largest one, of the Carpathian Mts., is present in Eastern Serbia, while Europe’s second largest one, stretching from Dinaric Mts. to Pindos Mts., reaches Southwestern Serbia. Population of the Eastern Balkans is represented with just a few individuals roaming through Stara planina Nature Park in Southeastern Serbia. 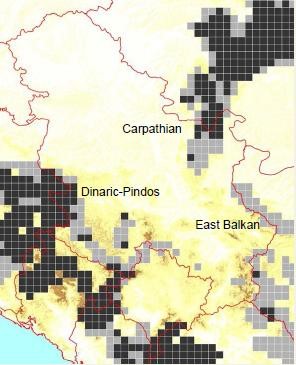 The Dinaric-Pindos population is the largest Brown bear population in Serbia, counting about 120 individuals. The population size is increasing, along with the range expansion.

The preferred Brown bear habitat is forested mountain area, less inhabited, but with extensive livestock farming, which is why Golija Mt. had traditionally been inhabited by this species, whose residential population was growing since the beginning of XXI century, when the nature protection measures regarding both the species and the area in question were determined. 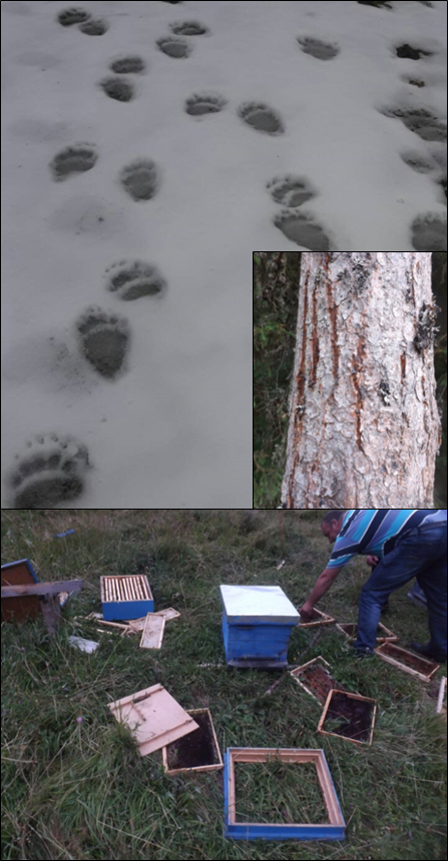 Main threats for Brown bear in Serbia include habitat degradation and loss, Illegal killing and negative human perception along with a low acceptance due to fear for personal and property safety.

Commonly bad public perception of large carnivores originates from the damage they cause to humans, as in livestock depredation, as well as beehives, orchards and property damages. Negative attitude is especially common in directly affected rural communities. The often misidentification of the damage-maker by lack of evidence leads to unjustly bad reputation of species such as Brown bear.

Ministry of Environmental Protection compensates the damage caused by protected species in Serbia, by establishing the Commission for Determining Compensation of Damage Inflicted by Protected Species, which decides on the submitted applications. Their data show a significant increase in bear-inflicted damages in Golija NP.

Although being aware of and accepting the Brown bear presence on Golija Mt. „since always“, the locals are not exactly welcoming its increasingly frequent presence in their close surroundings. With a healthy respect of this noble beast, the locals are taught from early on how to look after themselves in the woods and no bear attacks were recorded in this area in more than 100 years. However, there were many close encounters, despite the fact that both the humans and the bears try to avoid them.

Recently, the Manager of both Golija NP and Golija-Studenica BR – Public Enterprise „Srbijašume“, became aware of Brown bear population increase due to the number of bear sightings, tracks and marcations their rangers, along with the locals, have reported (Figure 4).

Concerns arose when the bears started to roam near human settlements, which meant that the encounter was more likely and the fear for safety started to spread in the local communities. The main concern, though, were the local children, many of whom took everyday hike of several kilometers to and from school, route of which often lead through undisturbed wilderness (Figure 5). 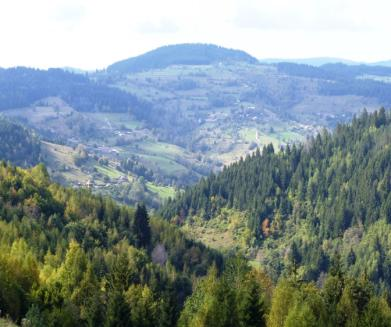 In 2017, a long-term project “Monitoring of Brown bear (Ursus arctos) in Golija Nature Park” was launched, funded by the Ministry of Environmental Protection and carried out by the Institute for Nature Conservation of Serbia and PE „Srbijašume“. The main Project objectives were to: map all recent (camera footage and field research) and historic data (literature data) regarding the Brown bear presence in the Golija NP; determine the residential population size and structure, individual home ranges and territories; determine bear migratory corridors that are habitat related, and analyze migratory patterns in regard to adequate positioning of additional feeding places; inform and educate the rangers as well as the local communities about the Brown bear population in the NP; address the safety concerns of the locals.

Several automatic capturing cameras were set up over additional feeding places in the PA and close to 40 days of field research have so far been conducted. Additionally, cameras were set ad hoc over the beehives where damages were reported (Figure 6). The already existing cameras on places for additional feeding of game animals were also used. The analysis included interviews with the rangers and with the locals, as well as the statistics and data of the Commission for Determining Compensation of Damage Inflicted by Protected Species, such as the number and position of reported bear-inflicted damages in the NP/BR.

The baseline of the Project was to determine Brown bear population size on Golija Mt. and continuously carry out monitoring (i.e. population dynamics, feeding behavior, geographical distribution, dispersal patterns) for the purpose of better understanding the bear population ecology.

So far, the Project has confirmed permanent or occasional presence of 15 to 20 individuals of both sexes and various ages, with possible existence of five independent reproductive groups (females with cubs) within the NP/BR. 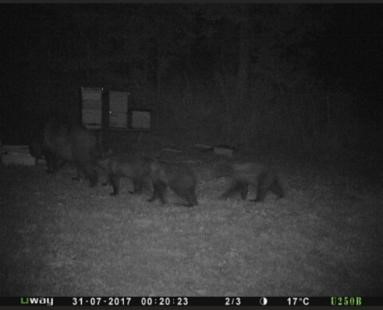 The main Project goals are to strengthen the Brown bear protection in Golija NP/Golija-Studenica BR by providing adequate additional feeding places and by improving local population perspective of having this animal as their neighbor. Providing suitable educational programs for the local communities is the key to fight the prejudice they may have in regard of the Brown bear and to feel and be safer.

New places for additional feeding are to be installed during the course of this project and positioned to distract animals from human settlements. Positioning will be based on the determined resident bears’ home ranges and bear migratory patterns.

In 2018, two educational workshops were held. The purpose of the first workshop was to present the main outcomes of the first year of the project to the Managers and to discuss future steps. The second workshop was of a larger scope, aiming to introduce both rangers and the locals with the findings of this project regarding the Brown bear population in Golija NP.

Figure 7: Presentation of the project results in educational workshop for the rangers and locals, as well as on local TV stations (Photo: INCS) 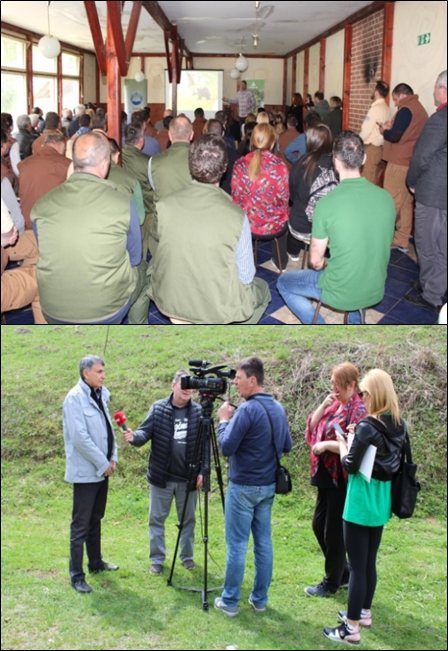 In the following years of the project, educational programs will further be developed, concentrating on the local communities. The overall goal of the project is to promote Brown bear population increase as the added value of this Protected Area and to involve local communities in the Brown bear protection and monitoring programs. The Manager intends to support opportunities for local sustainable development through the establishment of eco-tourism contents in Golija NP/Golija-Studenica BR, such as bear watching activities for visitors of the Protected Area.

To PE „Srbijašume“ – the Manager of both Golija NP and Golija-Studenica BR, who has envisioned this project together with the Institute and who is equally responsible for its ongoing success.

Special thanks to the rangers of PE „Srbijašume“ on their continuing on-field cooperation and support.

Institute for Nature Conservation of Serbia