Assessment: The total amount of 137Cs has reached the environment after nuclear tests in the post-war period from 1945 to 1980 and after the incident in Chernobyl in 1986. Based on data from the Agency for the Registration of Toxic Substances and Diseases (ATSDR, 2004), the radiological effect of 137Cs was released on the territory of Europe during the Chernobyl disaster was high.

Authors Bossew et al. (2001) state that Austria is one of the countries whose territory was significantly contaminated by the 137Cs after the Chernobyl disaster. The same authors also state that higher values of contamination can only be found in Ukraine, Belarus, Russia as well as in some parts of Scandinavia.

On the territory of Serbia distribution of 137Cs is heterogeneous. Authors Jankovic-Mandic et al. (2014) point out that the variability of the specific activities of 137Cs in samples of non-cultivated soil from the territory of Belgrade (3 – 87 Bq kg-1) is due to topographical differences and non-homogeneous surface contamination of the soil after the Chernobyl accident.

The specific activity of 137Cs in the soil of central and southern Serbia is different, however, two regularities can be noticed. According to the detected values, the two distribution curves can be separated, western and eastern (Map below).

On graph below maximum value of the specific activity follow the western curve and increase further from the Kopaonik National Park (NP) (Džoljić et al., 2017) to the area of exceptional qualities (protected area – PA) “Dolina Pcinje” (average value 101 Bq kg-1 (Petrović et al., 2016; Džoljić, 2017)). In the countries of the region, western from the sites covered by the study, a similar specific activity of 137Cs was also detected. Authors Antovic, Vukotic, Svrkota i Andrukovich (2012) indicate that in the soil of Montenegro the average specific activity is 81.1 Bq kg-1. Also the same authors point out that 137Cs detected in the soil of Montenegro was mainly due to the Chernobyl accident.

The specific activity of 137Cs at sites that follow the eastern curve show lower detected values than the western curve. The highest value was measured on the east most site, the Natural Park (protected area) “Rila Monastery” in Bulgaria (49 Bq kg-1), (Džojić, 2017). In the south, for example in Northern Macedonia, specific activity of 137Cs was recorded in uncultivated soil by authors Todorovik et al. (2015) ranges from 6.63 to 14.94 Bq kg-1. Values in Norther Macedonia are similar to the values at sites PA “Vlasina” the monument of nature (PA) “Jovačka jezera” and the mountain “Besna Kobila”. 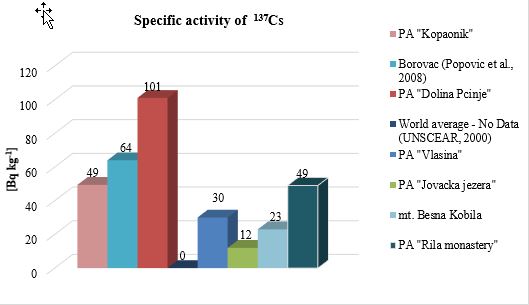 Fig. Detected specific ativity of 137Cs in the soil

By inspecting the literature data it can be concluded that the specific activity of 137Cs in the soil is significantly higher in countries that were exposed to the radioactive cloud from Chernobyl, including Bulgaria, R. Srpska, Serbia, Montenegro, North Macedonia, etc. Compared to other countries where the specific activity of 137Cs is the result of nuclear testing.

The importance of determining the distribution of specific activities of this radionuclide in the soil is primarily due to the development of traditional forms of agriculture, as well as local and organic products of this region, in order to improve the living standards of people living in this area.